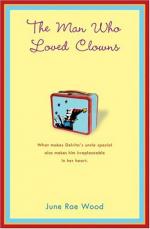 June Rae Wood
This Study Guide consists of approximately 32 pages of chapter summaries, quotes, character analysis, themes, and more - everything you need to sharpen your knowledge of The Man Who Loved Clowns.

The Man Who Loved Clowns Summary & Study Guide includes comprehensive information and analysis to help you understand the book. This study guide contains the following sections:

This detailed literature summary also contains Topics for Discussion on The Man Who Loved Clowns by June Rae Wood.

The Man Who Loved Clowns is the story of thirteen-year-old Delrita Jensen's journey to self-acceptance in a world where she feels she must constantly protect her handicapped uncle, Punky.

In the novel's first scene, Delrita Jensen struggles to run away from the new girl at school, Avanelle Shackleford, who chases her down while she is clearly trying to be friendly. Ever since Delrita moved to Tangle Nook, Missouri, her mother has been hounding her to make friends, but Delrita is hiding a secret: she lives with her Uncle Punky, who has Down's syndrome. Delrita is worried that if people find out they'll make fun of Punky, something she's spent her entire life trying to prevent. As a way of protecting Punky, Delrita has made herself socially invisible, refusing friendship offers and certainly not making any of her own. She is a lonely, sad girl, but she fears that letting anyone new into her life will only bring her pain. When Avanelle finally catches up to Delrita and invites her over for a snack, Delrita rudely turns her down.

In the days that follow, Delrita learns a lot about Avanelle and her family: they live on the outskirts of town, have a houseful of kids, are on welfare, and have a father in prison. Even though the girls are kindred spirits - both with a secret to hide - Delrita refuses to befriend her, or anyone else. A few weeks later, Delrita's parents take her and Punky to Silver Dollar City, an old fashioned city where a master woodcarver works. Delrita's favorite hobby is whittling wood, so she's very excited for the excursion. Her parents drop her and Punky off before heading further north to an antiques fair. The day couldn't be any better for Delrita: she and Punky ride rides, eat junk food, and best of all, visit the woodcarver's workshop, which is a source of great inspiration for Delrita. When they are supposed to meet Delrita's parents, however, Delrita has a nagging suspicion that something is wrong. As the minutes, and soon hours, tick by with no sign of her parents, Delrita knows something terrible has happened. Then she receives the news: her parents have been killed in a car accident. She and Punky are sent to live with Delrita's Uncle Bert (Punky's brother) and Aunt Queenie.

Delrita has a very difficult time adjusting to live with her uncle and aunt, mainly because Aunt Queenie's fastidious nature clashes with Punky's messy eating and habits. Delrita is outraged when her Aunt and Uncle suggest that Punky would do well at a sheltered workshop: a place for handicapped adults. Delrita's mother had dedicated her life to caring for Punky, and now Aunt Queenie wants to send him away. Delrita swears that she will stop at nothing to protect Punky, no matter the cost.

Feeling desperately alone, Delrita finally accepts Avanelle's offer to come over after school. The girls become fast friends, and Delrita soon develops a crush on Avanelle's older brother, Tree. For a few weeks, Delrita catches glimmers of real happiness as she enjoys her first friend, whose entire family accepts Punky as he is without making fun of him or asking him to change. Unfortunately, a misunderstanding with one of Avanelle's letters to her father in prison breaks up the happy friendship around the same time that Aunt Queenie succeeds in sending Punky to the workshop. Delrita feels as if her world is falling apart again.

At Aunt Queenie's insistence, Delrita accompanies Punky to work one morning and finds that it is a very happy place: he has friends, a girlfriend, and a sense of pride he never had before. Delrita is ashamed for the way she's been sheltering Punky, and she realizes that her own fears of rejection have caused her to hide behind Punky's handicap, using his difference as an excuse to separate herself from society. She vows to change, but unfortunately, Avanelle is unwilling to forgive her. As the weeks pass, Delrita resigns herself to becoming invisible once again. And then everything changes, once again: Delrita receives the terrible news that Punky has had a heart attack. A few days later, Delrita's best friend and uncle passes away. The entire city shows up for his funeral, and Delrita realizes that Punky was well loved by his community. At the close of the ceremony, she runs into the arms of Avanelle, who has realized that Delrita's friendship means everything to her, too.

More summaries and resources for teaching or studying The Man Who Loved Clowns.

The Man Who Loved Clowns from BookRags. (c)2022 BookRags, Inc. All rights reserved.