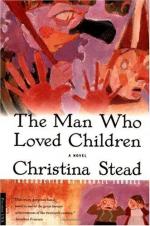 Christina Stead
This Study Guide consists of approximately 36 pages of chapter summaries, quotes, character analysis, themes, and more - everything you need to sharpen your knowledge of The Man Who Loved Children.

The Man Who Loved Children Summary & Study Guide includes comprehensive information and analysis to help you understand the book. This study guide contains the following sections:

This detailed literature summary also contains Topics for Discussion and a Free Quiz on The Man Who Loved Children by Christina Stead.

The Man Who Loved Children by Christina Stead is a novel, a work of fiction. It was first published in 1940 by Australian writer Christina Stead, who is often considered to be a largely ignored writer of her time.

The story surrounds the Pollit family. Sam and Henny Pollit have been married about ten years when the novel opens. There are six children, plus Louisa, Sam's daughter by his first wife who died when Louisa was six months old.

The familial relationships are dysfunctional at best. Henny is an heiress who has no concept of how to handle money and therefore the family is living well below poverty level. There is the hope that Henny will inherit when her father dies, something that will not occur. In fact, Henny will be penniless.

Henny and Sam loathe one another, a fact that becomes more evident and powerful as the book goes on. Henny has loathing for Sam and the way he refuses to address reality. Henny says that Sam has his head in the clouds and actually has suspicions that Sam is somewhat mad. Henny does not see reality as it truly is, either. Henny has a strong victim mentality and rarely takes responsibility for her own actions. Henny wants to be spoiled and taken care of by Sam, which clearly is not going to happen. Henny talks about being downtrodden and deeply affected by the grim reality of life with no options to change it. Sam refers to Henny as the devil incarnate and asks God why he had to marry a woman who hates him so much. Sam does not seem to grieve when Henny dies.

The relationships between the children seem to be rather typical. There is a hierarchy with Louisa being at the top, followed closely by Ernie, down to the newborn Samuel-Charles. The relationship between Louisa and Henny is not so typical. Since Louisa is not Henny's biological child, Henny does not claim Louisa as her own although Louisa's real mother died. Henny and Sam both treat Louisa as a slave at times. Louisa is given inferior clothes, is often beaten by Henny, and treated inappropriately by Sam. Sam often looks to eleven-year-old Louisa to solve his problems and act as a confidant rather than a child.

The book itself follows the every day life of the Pollits over a period of several years. The book starts out in 1936 in Washington, DC. The author does not keep track of time although it can be discerned that the story lasts for several years. Throughout that time the children grow while Sam feeds his massive ego and Henny becomes more bitter and hateful by the day. Henny calls the children beasts and Sam does little more than to entertain the children with obscure scientific and socio-political ideas as well as singing and talking in utter gibberish.

Very little is resolved by the end of the book, save for Henny's death by Louisa's hand. Throughout her adolescence Louisa has become so scarred that her only hope is to run away and try to start her life anew.

More summaries and resources for teaching or studying The Man Who Loved Children.

The Man Who Loved Children from BookRags. (c)2022 BookRags, Inc. All rights reserved.