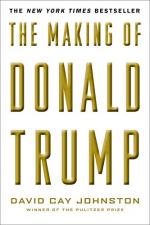 The Making of Donald Trump Summary & Study Guide includes comprehensive information and analysis to help you understand the book. This study guide contains the following sections:

This detailed literature summary also contains Topics for Discussion on The Making of Donald Trump by .

The following version of this book was used to create this guide: Johnston, David Cay. The Making of Donald Trump. Melville House Publishing, 2016, Kindle AZW file.

David Cay Johnston is a Pulitzer Prize winning investigative journalist with decades of experience. Years ago, he became interested in casinos and moved to Atlantic City to begin a series of stories about them. There, he met Donald Trump for the first time. Johnston said his first impression of Trump was that he was a modern-day P.T. Barnum. Since then, Johnston has investigated Trump on a deep professional and personal level, leading to this book. Johnston says he chose to release the book as voters were preparing for the 2016 General Election in the hope that voters would use it to further their education about one of the two main contenders for United States President. Johnston makes it obvious that he does not believe Trump is the best candidate, but he also does not endorse Trump's opponent, Hillary Clinton.

Johnston describes Trump's background, including his grandfather's arrival in America and how he began to amass the money that would eventually be turned into the Trump fortune. Trump's older brother, Fred Jr., died before their father, Fred Sr. When Fred Jr.'s family found out they would not receive the share of the estate as they had expected, they sued for the inheritance that they believed would have been given to Fred Jr., if he had survived. Meanwhile, Fred Jr.'s grandson was born critically ill in need of lifelong medical care. In retaliation for the lawsuit against his father's estate, Donald Trump withdrew medical insurance for the infant. The issue was later settled in court but the settlement was sealed from public view.

Johnston gives that episode as one example of Trump's vengeful nature. The author also talks about Trump's tendency to threaten a lawsuit against anyone who refuses to do as Trump says and Trump's tendency to walk out of anything – including live interviews – if he cannot control the conversation. Johnston points out that these traits are not acceptable for a president who cannot bully people into doing what he wants or walk out on Congress if lawmakers do not agree with him.

Johnston also covers some of Trump's business dealings, including hiring illegal Polish workers for a major demolition project and lending his name to projects to trick people into believing he was the developer. In the past, Trump had dealings with known criminals, including some who had ties to the mob. Johnston alleges that Trump has used fictional names to plant media stories about himself and has told outright lies about his personal relationships. He has also arranged for a series of elite awards to his own facilities from a hospitality organization, all while holding a seat on that organization's board. All the while, Trump has used his name and his wealth to avoid formal charges and straightforward investigations.

• There are multiple people named Trump mentioned in the book, especially in chapters that focus on family relationships. Donald Trump is the only person who is referred to by last name only. For the sake of clarity, all others are referred to by first name, or by first and last.