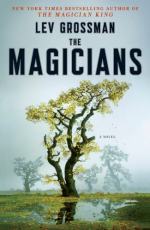 Lev Grossman
This Study Guide consists of approximately 33 pages of chapter summaries, quotes, character analysis, themes, and more - everything you need to sharpen your knowledge of The Magicians.

The Magicians Summary & Study Guide includes comprehensive information and analysis to help you understand the book. This study guide contains the following sections:

This detailed literature summary also contains Quotes and a Free Quiz on The Magicians by Lev Grossman.

“The Magicians” is a young adult fantasy novel by Lev Grossman which follows the life of Quentin Coldwater as from the age of 17 through his early 20s. When the novel begins, Quentin is a resident of Brooklyn, New York, and though he has a comfortable life, he is unhappy with it as well. Listless, he is looking for something more, but he doesn’t know what, and he doesn’t know where to find it. Quentin has a crush on his friend Julia, who is dating his friend, James.

Quentin is soon after accepted to Brakebills, a school of magic along the Hudson River in upstate New York. There, Quentin befriends and later dates the bookish-but-pretty Alice, and befriends the punkish-but-kind Penny. At Brakebills, Quentin learns the craft of magic. His teachers remind him that magic is neither an art nor a science, but a craft which must be constantly practiced and honed. Quentin, who has for a long time felt unhappy and without purpose, does feel temporarily happy and as if he has a purpose during his time at Brakebills.

After graduation, Quentin becomes listless once more. Even though he is in a committed relationship with Alice, he feels as if there is still something missing in his life. Quentin begins using drugs copiously, parties all night, and ends up cheating on Alice, which breaks Alice’s heart. As a result, she breaks up with Quentin. Nevertheless, Alice, Penny, and their friends learn that interdimensional travel is possible with use of a magic button, and so they decide to travel to the land of Fillory, the setting of their favorite novels as children. What they hope will be a lighthearted adventure turns out to be much more real – and terrifyingly so – than they had anticipated.

In Fillory, they are confronted by the Beast. The Beast, formerly Martin Chatwin, a child and character in the Fillory novels, has turned into an evil man. Martin, who is determined to rule over all of Fillory, is seeking the magic buttons that make interdimensional travel possible, and will allow him to control Fillory and what goes on inside its environs. Quentin and his friends battle the Beast, which leads to Penny having his hands bitten off, Quentin very nearly being killed, and Alice sacrificing herself to defeat the Beast.

Afterwards, Quentin and the survivors return to Earth. Back in New York, a heartbroken Quentin reforms his ways and commits to a steady, paying job in consultancy, though he again becomes listless and unhappy. Months later, three of Quentin’s friends return to visit him, and convince him to go back to Fillory to be kings and queens with them.

More summaries and resources for teaching or studying The Magicians.

The Magicians from BookRags. (c)2022 BookRags, Inc. All rights reserved.