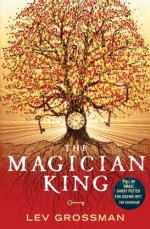 Lev Grossman
This Study Guide consists of approximately 34 pages of chapter summaries, quotes, character analysis, themes, and more - everything you need to sharpen your knowledge of The Magician King.

This detailed literature summary also contains Quotes and a Free Quiz on The Magician King by Lev Grossman.

“The Magician King” is a young adult fantasy novel by Lev Grossman, is the second part of his “Magician” trilogy, and follows the continuing adventures of Quentin Coldwater as one of the four monarchs of the magical land of Fillory. Quentin, Julia, Janet, and Eliot rule Fillory fairly and justly, and are beloved by the people and creatures of the land. However, during a recreational hunt to capture the Seeing Hare, a prophetic Unique Beast, the Hare predicts death and despair to come, and the Master of the Hunt, Jollyby, drops dead. Quentin and the others go into council in the attempt to determine what may have happened – but have no satisfactory answers.

Back on Earth, Quentin and Julia seek out Josh, who now lives in Venice, Italy, for he was last in possession of the magic button that brought them to Fillory in the first place. Josh reveals he has sold the button to a dragon for $250-million. Quentin seeks out the dragon, who will not return the button, but instead tells Quentin that heroes must be prepared to lose everything. The dragon goes on to explain that the old gods are returning for what is theirs, and the first door to Fillory is still open. Quentin, Julia, Josh, and Poppy (a dragon expert and friend of Josh’s) then travel to Cornwall, England, to the Chatwin home where the Chatwin children first accessed Fillory in 1917. There, Quentin, Julia, Josh, and Poppy are magically taken back to Fillory, where they join Eliot on his journey to collect the seven keys, as instructed by the Unique Beasts of Fillory.

It is ultimately revealed to Quentin and Julia in the Neitherlands by Penny that the old gods are reworking existence so that their magic cannot be accessed at all. Magic will cease to exist for people who practice it, and entire worlds based on magic – like Fillory – will completely disappear. Penny reveals that the people who first accessed the magical realm created an emergency back door to save magic should it ever be compromised. The door requires the seven golden keys. Penny explains that he, as well as the Neitherlands Order to which he belongs, will battle and delay the gods with the help of all the dragons of Earth to buy time for Quentin to save the day.

With all seven keys in hand, Quentin, Eliot, Julia, Poppy, and the others reach the extent of the world of Fillory, and there find a door with seven keyholes. Only a few decide to go through, including Quentin and Julia. Quentin is denied access for he does not have a passport, and Julia is denied access for she is the reason the gods have returned to reclaim their magic.

For years, Julia and her rogue magician friends sought to summon a goddess to tap into higher levels of magic. The result was the calling of a trickster fox god that butchered nearly all of Julia’s friends, and raped Julia, causing her to fill up with magic, and later be fully transformed into a demigoddess by the goddess she was originally hoping to call. It is revealed that summoning any god summons them all – who realized others had tapped into their magical realm, and now seek to close it. Quentin takes all the blame for what Julia has done, for it was he who first confirmed the existence of magic to Julia years ago. Julia is then able to pass through the door. Quentin is then ejected from Fillory, even though he has helped to save it.

More summaries and resources for teaching or studying The Magician King.