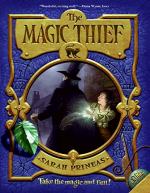 A locus magicalicus is a symbol of an individual wizard’s personality. All are different and represent both a wizard’s skill and moral alignment.

Food is a symbol of comfort and security, particularly for Conn who has spent much of his life on the streets, struggling to feed himself.

The clothes Conn buys himself with Nevery’s allowance are a symbol of his transition from a boy living on the street to someone who is now truly dedicated to being a wizard’s apprentice.

Conn transforming into a black cat with the use of the embero spell symbolizes his cleverness and craftiness. Though both Conn and Nevery expect Conn to transform into something like a rat, the fact that he transforms into a cat also symbolizes his goodness.

The tree in the courtyard of...