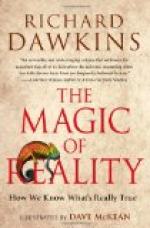 Plot Summary
+Chapters Summary and Analysis
The Magic Of Reality
What Is Reality? What is Magic?
2: Who Was The First Person?
3. Why Are There So Many Different Kinds of Animals
What Are Things Made Of?
5. Why Do We Have Night and Day, Winter and Summer?
6. What Is The Sun?
7. What Is A Rainbow?
8. When And How Did Everything Begin?
9. Are We Alone?
10. What Is An Earthquake?
11. Why Do Bad Things Happen?
12. What Is a Miracle?
Characters
Objects/Places
Themes
Style
Quotes
Topics for Discussion
Order our The Magic of Reality: How We Know What's Really True Study Guide

The Magic of Reality: How We Know What's Really True Summary & Study Guide

Richard Dawkins
This Study Guide consists of approximately 21 pages of chapter summaries, quotes, character analysis, themes, and more - everything you need to sharpen your knowledge of The Magic of Reality: How We Know What's Really True.

The Magic of Reality: How We Know What's Really True Summary & Study Guide includes comprehensive information and analysis to help you understand the book. This study guide contains the following sections:

This detailed literature summary also contains Topics for Discussion on The Magic of Reality: How We Know What's Really True by Richard Dawkins.

The Magic of Reality, written by popular science author and esteemed biologist Richard Dawkins, is an extended essay directed at explaining natural phenomena that occur throughout the known world, and arguing that a scientific understanding is superior to the belief in magic or the supernatural. Each chapter focuses on a different aspect of the world around us. Life, planets, stars, and disasters are all presented to the reader. First, myths are introduced in order to show the reader the ways in which people across the world attempted to explain these things. The author generally brings up interesting facts about these myths, as well as explores their inherent flaws in terms of what they might contribute to the understanding of the universe. Each chapter unfolds in more or less the same sequence, in an argument designed to examine past deficiencies in human beliefs and briefly explain to the reader how these beliefs may have come about in some cases. Once these ideas are presented in the chapter, the author presents what he considers their superior scientific alternatives. After the myths regarding the subject presented by the title heading are introduced, the author proceeds to explain what humans know now about the world, through the use of the scientific method. While many of the subjects that the author approaches are inherently complicated in nature, great efforts are taken to keep the general notion of science as a tool for understanding at play. Thus, the book is an excellent starting point for someone of very little knowledge about concepts such as evolution, the structure of the universe, or the nature of disasters on earth. Each chapter is similarly structured, and the gradual presentation of what scientists have discovered rapidly overcomes the supernatural explanations that once served to provide reasons for things that humans observed in everyday life. Through the work, the author argues that science is superior, not only because it offers better explanations of the world we see around us, but also because by using the scientific method, we come to control more of the world around us, which myths were never capable of doing. The simple approach taken by the author makes this book easily readable by even those totally unfamiliar with established scientific principles, and serves as a strong argument for the scientific understanding of the universe. Simple, yet straightforward and compelling, the book builds on knowledge presented in previous chapters to promote understanding of each separate topic. The work also does a remarkably good job of making simple arguments very powerful, and strongly supports the idea that scientific understanding is superior to the belief in myth or superstition.

More summaries and resources for teaching or studying The Magic of Reality: How We Know What's Really True.

The Magic of Reality: How We Know What's Really True from Gale. ©2005-2006 Thomson Gale, a part of the Thomson Corporation. All rights reserved.