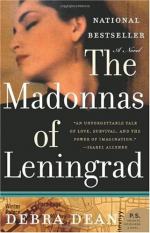 Debra Dean
This Study Guide consists of approximately 44 pages of chapter summaries, quotes, character analysis, themes, and more - everything you need to sharpen your knowledge of The Madonnas of Leningrad.

The Madonnas of Leningrad Summary & Study Guide includes comprehensive information and analysis to help you understand the book. This study guide contains the following sections:

This detailed literature summary also contains Topics for Discussion on The Madonnas of Leningrad by Debra Dean.

This multi-layered, poetically written narrative is a portrait of Marina, an elderly woman with a troubled past, a difficult present (due to Alzheimer's disease) and an uncertain future. As stories of her past and present intertwine, and as Marina finds it more and more difficult to distinguish between the two, the narrative explores thematic questions related to the nature and value of both memory and art, and the importance of loyalty and devotion.

Three different narrative threads entwine and interrelate as the story of the novel unfolds. The work begins with the first, a tour through the Hermitage Museum in Leningrad. This thread is written in the first person style of the tour's guide, with narration describing the rooms through which the reader (or tourist, as it were) is passing and the paintings contained in each room. The guide's identity is never defined, but it is in all likelihood Marina, the novel's protagonist, who is introduced in the second section, which in turn introduces the second of the work's three narrative threads, set in the present.

In that second narrative thread, the elderly Marina struggles with the memory-damaging effects of Alzheimer's disease. Her loving husband Dmitri struggles to help her get through the days and nights, but at this point in their life together is struggling particularly hard to get them both through the wedding of their granddaughter. Dmitri and Marina are accompanied to the wedding by Helen (Elena), their younger daughter, a divorcee whose children have left home and who is struggling to define an identity for herself. Marina's deterioration comes as a surprise to Helen, and she, in turn, struggles to come to terms with her lack of knowledge of her mother's past, the trials of her mother's present, and the uncertainty of her mother's future.

As Marina, Dmitri and Helen travel to and experience the wedding, Marina's memory explores her past. This is the third narrative thread - the beginnings of her relationship with Dmitri, and her being essentially adopted by an aunt and uncle following the arrest of her parents for being political dissidents. The primary focus of this narrative thread, however, is Marina's experiences as a guide in the Hermitage Museum in Leningrad, in particular the suffering she and her family experienced during the Siege of Leningrad in World War II. Marina, her aunt, and her uncle all take refuge from bombings, weather and violence in the museum's basement where they endure starvation, cold, disease, and despair. To gets through this torturous experience, Marina constructs what an elderly member of the Hermitage staff calls a "memory palace", a memorized recreation of all the rooms and all the artwork in the museum. As she and the elderly woman help each other construct their individual memory palaces, and as the suffering of those taking refuge in the Hermitage deepens, Marina discovers that she is expecting Dmitri's child.

In the present, and in the aftermath of the stress triggered by the wedding, Marina wanders away from her hotel room and disappears. The distraught Dmitri and the worried Helen search for her, and then when they can't find her, alert the police, who call for volunteers and start an expansive search. As Helen and Dmitri wait for more than twenty-four hours for news, narration portrays Marina as being lost between the two worlds of her present and her memory. She is eventually found and returned to her family as, in the narrative thread set in the past, the Siege of Leningrad is lifted and life for Marina begins returning to normal. The final scene in this narrative thread is of Marina, now heavily pregnant, offering a guided tour of the Hermitage. Its treasures, removed for safekeeping early in the war, are still missing, but Marina offers a tour of her "memory palace", slowly awakening in her young guests a vivid experience of art-triggered imagination. Meanwhile, in the final moments of the present day narrative, narration describes how the increasingly demented Marina again disappeared, but was found by a young laborer, who in turn describes her apparently giving him a tour ... "showing him the world".

More summaries and resources for teaching or studying The Madonnas of Leningrad.

The Madonnas of Leningrad from BookRags. (c)2022 BookRags, Inc. All rights reserved.