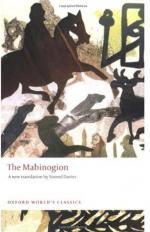 "... it came into her mind that were Gereint alie she would not be boxed on the ear so. With that Gereint came to himself at the echoing of her shriek...he knew then she was in the right."
(Gereint Son of Erbin, p. 269)

"Because thou hast spoken the word thou hast, bestow me upon him lest dishonour come upon thee."
(Pwyll Prince of Dyfed, p. 13)

"And for that reason, the name Talebolion was henceforth given to that commot"
(Branwen Daughter of Llyr, p. 29)

"[Efnisien] would cause strife between the two brothers when they were most loving."
(Branwen Daughter of Llyr, p. 25)

"I will bestow her upon thee, and authority over the seven cantrefs with her"
(Manawydan Son of Llyr, p. 41)

"I see a creature in thy hand like a mouse, and it ill becomes a man of such rank as thou to touch such a creature as that...