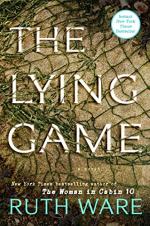 Ware, Ruth
This Study Guide consists of approximately 58 pages of chapter summaries, quotes, character analysis, themes, and more - everything you need to sharpen your knowledge of The Lying Game.

The Lying Game: A Novel Summary & Study Guide includes comprehensive information and analysis to help you understand the book. This study guide contains the following sections:

This detailed literature summary also contains Quotes and a Free Quiz on The Lying Game: A Novel by Ware, Ruth .

Isa Wilde was a teenager when her father sent her to the boarding school called Salten House. Her mother was dying, and her father wanted her to have a more stable life than he could provide. By the time she had finished her first meal at Salten House, she was friends with her roommate, Fatima, and with two other girls, Thea and Kate. Thea and Kate introduce the others to the Lying Game. Thea had been subjected to teasing when she was the new student at other schools, and she had created the Game because of the experience. Instead of targeting the new students, she targeted the popular girls and sometimes the faculty. Isa, Fatima, Thea, and Kate became inseparable and spent most weekends at Kate's home under the supervision of Kate's father, Ambrose. Ambrose was the art teacher at Salten House. He was lenient with the four girls and his stepson, Luc.

The girls always called on each other when they had problems. One Friday night they rushed to Kate's side to find that Ambrose was dead of an apparent suicide. Kate was just short of her 16th birthday. She convinced Isa, Thea, and Fatima to help her bury the body. She knew child services would force her into foster care if officials knew Ambrose was gone. They hid the body. Then, Isa, Thea, and Fatima returned to their dorm rooms at Salten House. They were roused early the following morning when their housemistress, Miss Weatherby, showed them drawings apparently drawn by Ambrose. The girls were featured in the drawings, and they appeared to be nude, though Isa knew they were not. Kate claimed that she did the drawings, and school officials decided that the girls should leave immediately to avoid expulsion. Kate waited until she was 16 to reveal to officials that Ambrose was gone. Her stepbrother, Luc, was returned to his biological mother in France. He was abused and returned to Salten Village as an angry adult.

The girls contacted each other a few times over the years, but each knew they could call on the others if they were in need. Isa was a lawyer and mother by the time Kate summoned them. Ambrose's body had been found more than 15 years after they hid it. Kate covers the arrival of the other three by saying they planned to attend an event at Salten House, but she uses the visit to alert them of the police findings. The investigation continued and police discovered that the body belonged to Ambrose and that he had died of an oral heroin overdose. Since the police determined he died under suspicious circumstances, the four women knew they would be questioned.

Isa begins to question the details of Ambrose's death. He died on Friday, but the drawings were not in school official hands until Saturday morning. She learns that Kate and Luc had been involved in a sexual relationship that Ambrose felt was incestuous, though the two were not related by blood. Ambrose had planned to send Luc to a boarding school to separate the two. While Isa, Thea, and Fatima initially wonder if Kate had killed Ambrose, they learn that Luc was the killer. They also discover that a local woman, Mary Wren, had been threatening and blackmailing Kate for years.

Kate and Luc die in a house fire, leaving Thea, Isa, and Fatima to answer police questions about Ambrose's death. They agree on a story and are determined to stand by that version of events to distance themselves from any participation in Ambrose's death. Isa tells the father of her child that she loves him. Though she knows it is a lie, she is determined to stand by it in an effort to make it true.

More summaries and resources for teaching or studying The Lying Game: A Novel.

The Lying Game: A Novel from BookRags. (c)2022 BookRags, Inc. All rights reserved.