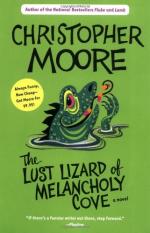 Christopher Moore
This Study Guide consists of approximately 44 pages of chapter summaries, quotes, character analysis, themes, and more - everything you need to sharpen your knowledge of The Lust Lizard of Melancholy Cove.

This detailed literature summary also contains Topics for Discussion and a Free Quiz on The Lust Lizard of Melancholy Cove by Christopher Moore.

The town constable of Pine Cove, Theo Crowe kicks a twenty-year drug habit about the time an ancient sea beast, along with the good intentions of the town psychiatrist, stirs the town into a lustful frenzy. Theo and his friends solve the mysteries and send the beast back to the ocean depths, while busting the county Sheriff for running a crack house. By the time the beast leaves, new love is blossoming everywhere in the town.

The novel begins with the death of Bess Leander. Theo feels that something is not quite right about Bess' suicide. His meager investigation consists of collecting Bess' antidepressants and asking Val Riordan, the town psychiatrist about the pills. Sheriff Burton reminds Theo to keep the death out of the news, and Theo obliges at first. Val worries that the statistical rate of suicide and antidepressants could mean many more deaths in town. She decides to switch all of her patients to a placebo, blackmailing the pharmacist to help her. About the same time, a giant beast wakes from his deep ocean slumber. He comes ashore, drawn by the smell of depression, and the sound of his old enemy playing the blues at the bar. When the beast tries to make love to a fuel truck, his gills are burned in the explosion. He disguises himself as a mobile home while he heals and makes friends with the town crazy lady, Molly.

Theo gets busy after the explosion and forgets about his drugs. After the explosion, the townspeople seem much crazier. Then a boy goes missing. Theo finds Bess' widower, Joseph, with a young waitress, which makes him question Bess' suicide even more. The Spider, the county sheriff department information nerd, gives Theo the autopsy report, which makes it clear that Bess did not kill herself. He also warns Theo about the Sheriff. When Theo confronts Joseph, Joseph takes him to the secret crack house on the ranch and confesses to murdering Bess and drug trafficking for the Sheriff. Joseph plans to have the crack crew kill Theo; however, Theo escapes when the crack crew and Joseph are all eaten by the hungry sea beast.

Theo follows the Sheriff to a cave by the beach, where the people have been drawn to the beast. Theo gets trapped in the cave with the beast and the pilgrims. Before the Sheriff's bribed SWAT team can flush them out, the blues guitarist, enemies with the sea beast from fifty years ago, draws the beast out of the cave, with pilgrims hanging on tightly. The beast gets free to go attack his old enemy. The guitarist gives the guitar to the pharmacist, who has a sea creature fetish. The beast eats the pharmacist, clearing Val's reputation. Molly rejects the beast and tells him to go back to the ocean now that he has healed. Theo catches the Sheriff before he can escape, and with the Spider's and all the witnesses' help, puts the Sheriff in jail for life.