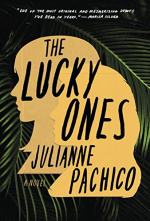 The Lucky Ones Summary & Study Guide

Julianne Pachico
This Study Guide consists of approximately 57 pages of chapter summaries, quotes, character analysis, themes, and more - everything you need to sharpen your knowledge of The Lucky Ones.

The Lucky Ones Summary & Study Guide includes comprehensive information and analysis to help you understand the book. This study guide contains the following sections:

This detailed literature summary also contains Quotes and a Free Quiz on The Lucky Ones by Julianne Pachico.

The following version of this book was used to create this study guide: Pachico, Julianne. The Lucky Ones. Spiegel & Grau, an imprint of Random House, 2017. First American Edition.

The Lucky Ones is a collection of stories tracing how the Colombian conflict affects a group of indirectly related people. Each story features a different protagonist, taking place in different years and locations. However, each story overlaps or somehow references other stories in the collection. Therefore, by the end of the collection, the reader has a strong sense of the main group of characters and their relationships with one another.

"M+M" tells the story of two of the collection's major characters, Mariela and Martin. The story takes place during the Colombia conflict's decline, and it is told by Martin, who has become the leader of the revolution. Throughout the story, Martin imagines a conversation he has with Mariela, remembering their past friendship during the school days. In this way, "M+M" takes place in two time periods: both Martin's past and Martin's present. "Siberian Tiger Park" takes place during Mariela's school days, telling the story of a group of young girls, who use their imagination in order to remove themselves from their school environment.

"Honey Bunny" takes place during the Colombian conflict, but it is set in New York City. It tells the story of La Flaca, one of Stephanie and Mariela's classmates, who struggles to reconcile herself with her Colombian past. In the story, La Flaca snorts cocaine in order to forget Colombia, but by the end of the story, begins to deliberately remember her time there. "The Tourists" takes place during the Colombian conflict, and is set in Colombia, telling the story of how Mariela's father was attacked by the communist rebels the day he threw a party. "Junkie Rabbit" takes place after "The Tourists," and explores how this attack affected the rabbits who lived at Mariela's house.

"The Bird Thing" is told from the point of view of Angelina, Stephanie's servant from "Lucky." In "The Bird Thing," the reader learns about Angelina's childhood in an impoverished part of Colombia, and how Angelina had to give up one of her children because she could not afford to support him. "Julisa" explores the relationship between Julisa, a student in an impoverished neighborhood in Colombia, and Eduardo, a student teacher in Colombia at the time of the conflict. By the end of the "Julisa," Eduardo has become an active member in the political sphere, for he is angered by the sudden disappearance of Julisa.

More summaries and resources for teaching or studying The Lucky Ones.

The Lucky Ones from BookRags. (c)2022 BookRags, Inc. All rights reserved.