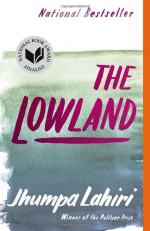 Jhumpa Lahiri
This Study Guide consists of approximately 88 pages of chapter summaries, quotes, character analysis, themes, and more - everything you need to sharpen your knowledge of The Lowland.

The Lowland Summary & Study Guide includes comprehensive information and analysis to help you understand the book. This study guide contains the following sections:

This detailed literature summary also contains Quotes and a Free Quiz on The Lowland by Jhumpa Lahiri.

The Lowland by Jhumpa Lahiri is a work of fiction that follows two brothers born only 15 months apart in Tollygunge who embark on two very different roads in life. Although they are inseparable as children, they have opposite natures and fate will put them on very different paths. Set in the 1960's, Udayan is a personable and outgoing young man who is drawn into the political upheaval of the Naxalite movement and who is willing to sacrifice everything in an effort to put an end to the starvation and inequality that caused so much suffering. The oldest brother Subhash is the more reserved and dutiful of the two brothers, letting Udayan take the spotlight and lead the way for most of their childhood. When his brother becomes involved in the political movement of the time Subhash decides to continue his education in America.

Udayan believed they could make a difference. Udayan didn't expect to meet Gauri however, and falling in love with her makes his life as a revolutionary even more risky. When Udayan's political activities graduate from painting slogans in secret to keeping watch while a policeman is killed, he tells Gauri that they will never have a family. Neither of them realize she is already pregnant - something Udayan will never know as he is killed by soldiers later that day.

Pursuing a life of research and science, Subhash is content until he receives a letter telling him his brother is dead. He returns to India to find his parents broken by the experience. When he learns that Udayan's young wife is expecting, he offers her an escape from the in-laws who have little use for her. Subhash takes her to America where she gives birth to Bela. Intricately woven, this story explores the repercussions of decisions made by Udayan, Subhash, Gauri and Bela, linking them through tragedy and love.

More summaries and resources for teaching or studying The Lowland.

The Lowland from BookRags. (c)2022 BookRags, Inc. All rights reserved.