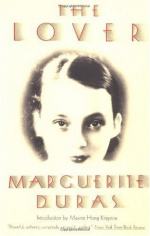 Get The Lover from Amazon.com
View the Study Pack
View the Lesson Plans
Study Guide
Order our The Lover Study Guide

Marguerite Duras
This Study Guide consists of approximately 46 pages of chapter summaries, quotes, character analysis, themes, and more - everything you need to sharpen your knowledge of The Lover.

The Lover Summary & Study Guide includes comprehensive information and analysis to help you understand the book. This study guide contains the following sections:

This detailed literature summary also contains Topics for Discussion and a Free Quiz on The Lover by Marguerite Duras.

The novel tells the story of a young French girl living in Colonial French Indochina during the early 1930s. As her family's fortunes decline, she begins a sexual relationship with a much older Chinese man who, in turn, financially supports the family. The affair scandalizes society but is pursued with reckless abandon for about eighteen months. Finally, the girl and her family return to France, permanently ending the relationship. The girl's family then goes through a period of upheaval in pre-war, German-occupied, and, later, liberated Paris. The girl narrates the novel from the perspective of years and life experience.

The novel is generally considered highly autobiographical in nature. In c. 1983, the unnamed narrator, an aged woman living in Paris, considers her history as a fifteen-year-old girl living in French Indochina during c. 1929. Her father was a colonial officer and her family, consisting of parents, two older brothers, and herself, lived in Sadec, approximately 100 miles from Saigon, across the Mekong River. Her father became ill and returned to France for treatment; he died in France shortly thereafter. The narrator's mother, Marie Legrand, spends the next approximate decade working as a French-language school director and slowly dissipating the family's once-substantial wealth. The narrator's unnamed oldest brother dominates the other children through violence and cruelty, supported entirely by the doting mother. The object of his particular wrath is the younger brother, Paulo, and the children spend most of their time in idle dissipations as the Colonial family's fortunes fall into decay and poverty.

At the age of fifteen and one-half, the narrator travels from Sadec to Saigon to return to school. She takes local transportation, which includes a ferry ride over a branch of the vast Mekong River. On the ferry, she is joined by chance by a limousine carrying a wealthy Chinese financier in his mid-thirties. The man—the lover—approaches the young girl, makes conversation, and initiates a romantic relationship, which spans the next eighteen months. The relationship becomes sexual almost immediately and the young narrator finds immense pleasure in sexual union. The lover lives in fear that the relationship—actually illegal because of the narrator's age—will be discovered. The narrator's family recognizes the relationship for what it is but mutely accepts it because the rich man provides money and a strained type of social access, which they once knew. The older brother continues to become more violent and more criminal and is finally sent away by the mother to France for a supposed education. Eventually the lover's father—demands the unseemly relationship end and threatens to cut off the lover if he refuses to comply. Meanwhile, the colonial French society of the area is scandalized and largely isolates the narrator's family.

At the age of seventeen the narrator moves back to France with her mother and younger brother, ending forever the relationship with the lover. On the lengthy ship transit home the younger brother pursues a public affair with a married woman. In pre-war and German-occupied France, the narrator dallies with schooling but pursues a life as a writer, getting married and having children. When Paris is liberated, the narrator's personal life goes through a period of upheaval. Eventually her mother returns to Indochina and later the younger brother dies. The narrator views her brother's death as the end of her youthful conception of personal immortality. The narrator's later life often consists of periods of introspection about her family and her relationship with the lover. The novel concludes as the lover, now an aged man with a long history of family, concisely contacts the narrator by telephone and again expresses his undying love.

More summaries and resources for teaching or studying The Lover.

The Lover from BookRags. (c)2022 BookRags, Inc. All rights reserved.