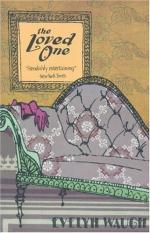 The Loved One Summary & Study Guide

Evelyn Waugh
This Study Guide consists of approximately 34 pages of chapter summaries, quotes, character analysis, themes, and more - everything you need to sharpen your knowledge of The Loved One.

The Loved One Summary & Study Guide includes comprehensive information and analysis to help you understand the book. This study guide contains the following sections:

This detailed literature summary also contains Topics for Discussion and a Free Quiz on The Loved One by Evelyn Waugh.

Evelyn Waugh's novel, The Loved One, is a pitiless satire on the shallowness and pretensions of British expatriates and Americans in post-World War II Los Angeles. The action is set principally in two funeral parlors, one for humans and the other for pets. Most of the characters either work in one of the funeral homes or are employed by a Hollywood film studio. Waugh portrays the Los Angeles denizens as part of a culture that fosters and encourages the selfish pursuit of petty goals. In the book, almost everyone is striving to gain or maintain a place in society that they seem to believe is important because other people might envy them for it. The principal character, a young Englishman named Dennis Barlow, is a poet-cum-screenwriter who leaves his job at the studio, which he hates for its bureaucracy and lack of imagination. He takes a job at a pet cemetery, scandalizing his fellow Englishmen in Hollywood, particularly an actor named Sir Ambrose Abercrombie, who believes the expatriate British have a reputation and an image to uphold. When an old screenwriter and fellow Brit named Sir Francis Hinsley is fired from the film studio and commits suicide, Sir Ambrose enlists Dennis to take care of funeral arrangements. At a well-known funeral home called Whispering Glades, Dennis meets a young woman named Aimée Thanatogenos, who is a cosmetician in the embalming rooms. Aimée, a thoroughgoing product of Los Angeles, is empty-headed yet yearns for higher things, although she cannot really say what this means to her. Dennis becomes enamored of her. A rival for Aimée's affections is Mr. Joyboy, the chief embalmer at Whispering Glades, who is widely considered to be a stylish and cultivated man, although he actually is a rather perverse momma's boy.

Dennis, a dishonorable fellow, initially wins the contest for Aimée's heart, in part because of love poems he filches from famous writers and leads her to think are his own. When Mr. Joyboy discovers this fraud, he exposes Dennis to Aimée. At the same time, she learns Dennis's other secret, that he works at the pet cemetery, which the employees of Whispering Glades consider to be a degraded establishment. Aimée breaks off her private engagement to Dennis and quickly becomes publicly engaged to Mr. Joyboy. When Dennis reminds her that she made a promise to marry him, from which he refuses to release her, Aimée becomes distraught and commits suicide. Mr. Joyboy, afraid that the scandal of his fiancee's suicide will ruin him professionally, goes to Dennis for help. Meanwhile, Dennis is approached by Sir Ambrose, who is so appalled at Dennis's pet cemetery job that he pays him to go back to England. Dennis enlists Mr. Joyboy to help him cart Aimée's body to the pet cemetery for a secret cremation. The plan is that everyone will think Aimée ran away with Dennis, who will move back to England. Dennis extracts money from Mr. Joyboy for the financing of this plan, adding it to the payoff from Sir Ambrose. As the novel ends, he sits back with a book at the pet cemetery to await the finish of Aimée's cremation.

The Loved One from BookRags. (c)2022 BookRags, Inc. All rights reserved.