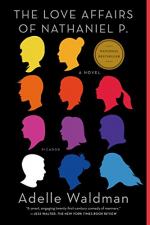 Adelle Waldman
This Study Guide consists of approximately 65 pages of chapter summaries, quotes, character analysis, themes, and more - everything you need to sharpen your knowledge of The Love Affair of Nathaniel P.

This detailed literature summary also contains Quotes and a Free Quiz on The Love Affair of Nathaniel P by Adelle Waldman.

At the height of his literary career, Nathaniel Piven, known as Nate in the novel, first confronts women from his past when on his way to his ex-girlfriend Elisa’s dinner party. He accidentally runs into Juliette on the street, a young woman he went out with only a couple of times but whom he impregnated. Juliette accuses him of being an asshole, having disappeared on her after she had an abortion. This run-in set off Nate’s internal monologue, which continues on through the entire novel; the narrator depicts Nate’s thought process as he struggles to make amends with his complicated past with women and seeks balance between his writing career and his personal life.

At Elisa’s dinner party, Nate reveals the theme of his latest essay on the outsourcing of economic exploitation. In other words, his concerns are with liberal guilt. The night’s conversation focuses on the issues of concern for Nate’s generation of 30-something’s in Brooklyn, New York. Nate notices Hannah at this party, someone he recognizes from past social gatherings, who is also a freelance writer whom he eventually has a serious relationship with. It is also at this party that Elisa reveals she is not completely over Nate. She hits on him by the end of the night.

After an introduction to the primary characters of the novel, the narrative devotes a whole chapter on a biography of Nate’s past — from his childhood onward. Nate is the son of Jewish immigrants. He went to Jewish day school and was not much to look at as a young man. He was strong at math with a 4.0 GPA, the type who was placed in advanced classes, good at soccer and baseball but not exactly an athlete. He was your basic nice guy. He went to Harvard after high school and met Kristen, with whom he had his first serious relationship. He met Jason at Harvard as well, who became a life-long friend. By the end of his twenties, he had managed to make a career as a freelance writer, and was even offered a position as a regular book reviewer for a major online magazine.

A few days after Elisa’s dinner party, Nate gets an email from Hannah, who extends the dinner conversation on liberal guilt. At first, Nate hesitates to get involved, afraid to have yet another failed relationship. He also worries about what his friend Jason would think, how he would not date someone like Hannah, but feels guilty for even thinking this way. Although he vacillates during their date, he comes to realize that he likes the lively conversation and surprises himself by not doing what he normally does and make a mental list of his date’s faults. He throws caution to the wind by the end of the night of their first date by making out with her and enjoying the moment.

Yearning to see Hannah again, and against some apprehension, Nate calls her the next day. They meet at a bistro restaurant where they talk about their upbringing. At Nate's suggestion, they go to her place afterward and he makes a pass at her; she resists, offering him to stay over, but without sex. Her response surprises Nate, but he says he is fine with it. He really wants to stay, and she says it would be just fine.

Sometime later, Nate meets up with his headstrong, opinionated, but close friend Aurit, who grills him over his second date with Hannah, reprimanding him for not calling her by now. Nate emphasizes that it had been four nights ago that they had talked and that it was nice. Aurit suggests that Hanna is someone that might actually be good for Nate. In walks Greer Cohen, a young literary success with a bigger book deal than Nate’s, and whom his friends at Elisa’s party criticized for being pretentious. Nate notices how attractive and sexy she looks. After some light banter, Greer leaves and Aurit continues her assessment of Nate’s love life, berating him for a history of picking the wrong women who are pretty; he finds reasons to be interested, but then when things do not work out he acts like the woman is the problem or relationships in general rather than seeing that the problem is in the women he chooses.

Nate is elated that his book is about to be released soon, feeling extremely gracious. He realizes that what makes him mildly anticipatory about seeing Hannah again is because they could both be the best versions of themselves. He knows himself well enough that he can predict how his good-natured side will not last as everything tends to fade. He agrees to Hannah’s terms not to have sex when he asks her out again. After that night when she made it clear she did not want to have sex just yet, it would be all the harder to tell her he is not looking for something serious. He muses on how no one could stop him if he really wanted to be in a relationship, but at this time in his life he feels fulfilled from work and friends and so does not feel the desire for a romantic relationship. He hopes to argue that women want so badly to be in a relationship because they hate being alone. After all this vacillating back and forth in his thoughts about Hannah and about women in general, Nate gives in to his “asshole” tendency and writes a new message to Hannah that he cannot get together that night after all because of being swamped with a book review. After he sends the message, relief washes over him.

It is not long before Nate changes his mind and asks Hannah out again. She lifts her ban on sex. He grows in his fondness for Hannah and clearly moves toward starting a relationship with her, even though he had been nearly resolved not to. They narrate each other’s lives to each other for the following weeks and have, according to Nate, great sex. However, trouble starts when Nate thinks about Hannah and their relationship in light of the opinion of his friends, including the ones with the most influence over him, Aurit and Jason. While he pushes back against Aurit’s opinion that romantic relationships are the most important kind for humans, he finds himself overly sensitive to Jason’s opinion that Hannah is mousy and not a perfect 10. He confronts Elisa at Jason’s suggestion, telling her that he is seeing Hannah. Elisa is more angry at Hannah than at Nate, but the discomfort he feels with Elisa makes him appreciate Hannah all the more.

Just as the two of them have gotten comfortable with their relationship, Nate starts to withdraw from Hannah, seeing her as vulnerable and needy. They have their first argument wherein Hannah senses accurately that things are somehow different between the two of them. Her lashing out at him in anger unnerves Nate, leaving him shaky and on edge. After this, he starts picking on her looks, the flabby part of her arm, shallow thoughts that he feels ashamed of. After he checks out another woman most obviously at a restaurant, things go downhill quickly. They try to salvage what is left, but they finally break up.

Nate runs into Greer Cohen yet again, who offers him her card with her number. After getting a hostile email from Hannah, Nate makes a move on Greer’s flirtatious offer to get together to talk about writing. In the finale, he stays with Greer and moves in with her. He has not forgotten Hannah entirely though, as he remembers their good times together, and that he had even loved her. He cannot figure out why he ended up unhappy with Hannah, but resigns himself to the fleetingness of life and relationships.

More summaries and resources for teaching or studying The Love Affair of Nathaniel P.