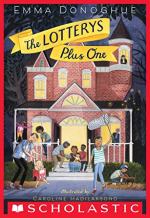 The Lotterys Plus One Summary & Study Guide

Emma Donoghue
This Study Guide consists of approximately 83 pages of chapter summaries, quotes, character analysis, themes, and more - everything you need to sharpen your knowledge of The Lotterys Plus One.

The Lotterys Plus One Summary & Study Guide Description

The Lotterys Plus One Summary & Study Guide includes comprehensive information and analysis to help you understand the book. This study guide contains the following sections:

This detailed literature summary also contains Quotes and a Free Quiz on The Lotterys Plus One by Emma Donoghue.

The following version of this book was used to create this study guide: Donoghue, Emma. The Lotterys Plus One. Scholastic Inc., 2017. Kindle Edition.

The introduction states that an Indian man and a Canadian man fell in love and befriended another couple, a Jamaican woman and a Native American woman. After winning the lottery, the two couples purchased a home in Toronto together and became full-time co-parents to seven children. They changed their last name to Lottery, termed their home ‘Camelottery,’ and adopted the nicknames PopCorn, PapaDum, CardaMom, and MaxiMum, naming all of the children after trees.

The novel is narrated by one of these children, a precocious nine-year-old named Sumac. In the first chapter, she goes to a museum with ten-year-old Aspen, three-year-old Brian and one-year-old Oak, as well as their parents. The older children – sixteen-year-old Sic, fourteen-year old Catalpa, and twelve-year-old Wood – are away on a camping trip.

PopCorn reveals that his estranged father has been in a home fire. Sumac accompanies PopCorn on his trip to Faro, Yukon, where his father lives and where PopCorn himself grew up, to visit her grandfather: he is unfriendly and mainly silent throughout the visit. PopCorn, concerned about his father’s health, decides to bring him back to Camelottery. Aspen gives her grandfather, who is soon nicknamed Grumps, a tour of the home: he appears unnerved by the large, multicultural family and by the fact that he is not allowed to smoke cigarettes in the house. The next day, the parents inform the children that their grandfather likely has dementia. Sumac, who notes that dementia sufferers prefer to speak about the past, creates a video slideshow with old pictures of Grumps, his wife, and PopCorn: however, the slideshow upsets Grumps. The following day, the older siblings return from their camping trip and are angered to learn of Grumps’ stay.

Sumac must relinquish her bedroom to Grumps, since it is more accessible: Grumps also offends the family members by noting that their rescue pets seem weak and injured. On Saturday, the Lotterys –except for Grumps, PapaDum, and Catalpa – go to the beach. Sumac is assigned to be her grandfather’s guide and give him information about the family. Over the following week, Grumps continues to agitate the family with rude comments and refuses to accompany them on their normal excursions to art markets and events. He does accompany the family to the beach, where he encourages Brian to learn to swim but becomes lost while swimming on his own. Later that day, he accuses Sumac of cheating at chess and accidentally leads Brian into a poison ivy patch. The parents tell the children that Grumps’ medical tests revealed cognitive deficits, so he must live with the Lotterys permanently for his own safety. When they tell Grumps the same news, he becomes infuriated and accuses them of kidnapping him.

For the two days following this argument, Grumps stays in his room and does not communicate with the family. Sumac remembers how MaxiMum had suggested that Grumps live in an assisted living facility, and she plans to secretly convince him to suggest moving to one. She begins pointing out the Lotterys’ chaotic behaviors, such as Aspen’s frequent falling, and what Grumps perceives as the negative qualities of each family member, such as PopCorn’s tattoos; she also researches nursing facilities online and, while the family creates a tightrope at the playground, she attempts to recruit her siblings to help her with the plan. Aspen agrees to help, but begins playing malicious pranks on Grumps, such as supergluing his door shut.

The family goes to the toy store for Oak’s second birthday, and Brian steals a bag of marbles in order to give them to Grumps, since she overheard that Grumps is “losing is marbles" (Kindle Location 601). At dinner that night, Sumac gives a slideshow presentation on assisted living facilities, causing Grumps to leave the table in anger. The parents chastise Sumac, who becomes ashamed and retreats to her bed, refusing to speak to anyone.

The following day is Oak’s birthday. While the children and Grumps are playing a game, Grumps accidentally steps on Oak’s hand and breaks it. Oak is taken to the hospital and the parents become enraged at Grumps, who does not emerge from his room for two days. When Sic checks on him, the family realizes that he has disappeared, and Sumac suggests that he may be at the airport, planning to go back to Faro. The entire family travels to the airport, where Sumac convinces Grumps to return to Camelottery.

The next day, the parents tell the children they have decided that Grumps should live in an assisted facility. Sumac suddenly changes her mind and passionately argues that Grumps should continue living at Camelottery; the family accedes. Over the following week, the family goes to a butterfly park and public movie together, and Grumps participates more fully in their activities – he gardens with PapaDum and builds Brian a toy plane, for example. The novel concludes with a celebration of the Hindu festival Rakhi; the Lotterys invite PapaDum’s parents and their neighbor Mrs. Zhao, and Grumps interacts well with each of these people. Grumps is given a new GPS watch in case he becomes lost, and the entire family participates in a festival by tying threads representing siblings around each other’s wrists.

More summaries and resources for teaching or studying The Lotterys Plus One.

The Lotterys Plus One from BookRags. (c)2022 BookRags, Inc. All rights reserved.