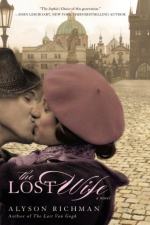 This detailed literature summary also contains Quotes and a Free Quiz on The Lost Wife by Alyson Richman.

Lost Wife begins with an older man, Josef, getting ready for the wedding of his grandson. While he’s at the wedding, Josef spots someone on the bride’s side that seems to be familiar to him. After the reception, he goes to speak with her, convinced that he’s seen her before. At first, she doesn’t seem to recognize him, but he’s positive he knows her when he sees the numbers tattooed on her arm. He introduces himself as Josef, referring to her as Lenka, his lost wife.

The story is then told in a mixture of flashback and passages from the present day. The chapters switch between the perspectives of the two different characters. For the most part, the past sections are told from the perspective of Lenka. Lenka met Josef when she started at an art academy. Her best friend was Josef’s younger sister, Věruška. Lenka started to spend time with the family, even being invited on vacation with them.

Josef and Lenka both had strong feelings right off the bat. On vacation, they found time to sneak away from the rest of their family so they could start a relationship. Their early relationship flourished, but things soon took a dark turn. The Germans were on the move, and soon Prague was occupied.

Josef proposed to Lenka and the two were married. During the honeymoon, Josef admitted that he wanted Lenka to marry him because his family had secured papers for their family to go to America. Lenka refused because she didn’t want to leave her family behind. Josef pleaded, but it was no use. She convinced him to go to America, and he promised that once he arrived he’d find a way to rescue her.

Lenka believes that Josef is killed when he’s mistakenly listed as the causality of a sunken ship. Josef’s family perished, but he was lucky enough to be pushed onto a lifeboat. Lenka is devastated by the news. She doesn’t have time to mourn because she and her family are soon sent into the ghetto of Terezin. Lenka gets a job in the art department, making post cards and greeting cards for the Germans.

Lenka and the other Jews are treated inhumanely in the ghetto. She joins a resistance group of artists who are trying to capture what life is really like in the ghetto. Through some of their smuggler contacts they’re able to get their drawings out of the tortured Jews, letting the world on the outside know how much they are suffering. The artists are punished, with many being outright killed or being sent off to Auschwitz.

Josef’s sections are much shorter. Josef was able to make it to America. He wrote to Lenka as frequently as possible, but his letters were soon being marked as undelivered. He was told a few years later that Lenka had passed away. Josef tried to move on and start life with another refugee, Amalia, but his heart always belonged to Lenka. The rest of his sections focus on the family that he raised with Amalia, and the pain that he felt being the only survivor of his family.