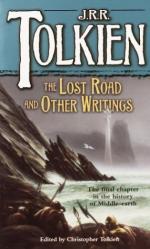 The Lost Road and Other Writings: Language and Legend Before 'the Lord of... Setting & Symbolism

J. R. R. Tolkien
This Study Guide consists of approximately 27 pages of chapter summaries, quotes, character analysis, themes, and more - everything you need to sharpen your knowledge of The Lost Road and Other Writings.

The creation of Iluvatar following the destruction of the Song of the Ainur. The Ainur who entered the World became Valar. Middle-Earth is contained here.

The land of the Valar. Only immortals can live here, with few exceptions. The Valarindi and some Eldar live there as well. The Two Trees were planted in Valinor and destroyed there. Valinor surrounds Middle-Earth and was created when the previous home of the Valar was destroyed.

A large island in the Sundering Seas to the West of Middle-Earth where the greatest realm of men lived. Numenor was destroyed when the Numenoreans rebelled.

The setting of most of Tolkien's works. It was created by Morgoth when he split it from Aman, or the land of the Eldar. Middle-Earth's relation to Valinor changes over the ages. Early it is flat and connected to Valinor, but later it is its...

More summaries and resources for teaching or studying The Lost Road and Other Writings: Language and Legend Before 'the Lord of....

The Lost Road and Other Writings: Language and Legend Before 'the Lord of... from BookRags. (c)2022 BookRags, Inc. All rights reserved.