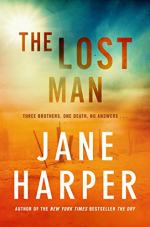 Related Topics
The Dry: A Novel
Force of Nature

Jane Harper
This Study Guide consists of approximately 48 pages of chapter summaries, quotes, character analysis, themes, and more - everything you need to sharpen your knowledge of The Lost Man.

This detailed literature summary also contains Quotes and a Free Quiz on The Lost Man by Jane Harper.

The following version of this book was used to crate this guide: Harper Jane. The Lost Man. Little, Brown, 2019.

This mystery novel from Jane Harper is based on a supposedly normal family who lives in the Queensland outback in north-eastern Australia. Narrated in the third person, the story is told primarily through the eyes of the eldest brother, Nathan Bright, who lives in isolation from the rest of his family on land that was gifted to him from his ex-father-in-law.

A few days before Christmas, Nathan is called to the stockman's grave - a small stone that is hours away by car from the nearest town. His middle brother Cameron has been found dead, his head resting against the grave trying to savor the only shred of shade that can be found for miles. He drives out with his son Xander who is visiting for Christmas. Xander usually lives in Brisbane with Nathan's ex-wife, Jacqui, and the two of them set out to meet Nathan's youngest brother Bub at the gravesite.

They arrive at the scene and are surprised to find that Cam's body shows no signs of struggle, no wounds or bruising, and his car is fully functioning with more than enough food and gas to last days stranded in the outback. Everything seemed to be normal. Everything other than the fact that Cameron's car was found a ways away from his body - almost too far to walk in the heat. Nathan, Xander, Bub, and the police officer who was on relief duty that day cannot find any plausible reason as for why he would leave his car. Cam has lived there his entire life, and would have known that leaving his car without supplies would be a death sentence. There are no answers - only questions, and this leads the group to believe maybe it was a suicide induced by the wretched heat.

The two brothers and Xander make their way to Cameron's property where the remainder of the novel takes place. At the house is Ilse, Cameron's wife, and their two daughters Lo and Sophie. There is also Nathan and Bub's mother Liz, Uncle Harry - who is not actually an uncle, but has been around working for longer than Nathan has been alive, and lastly two backpackers Simon and Katy, who were hired by Cameron to work on the farm. As the characters are introduced it reads like an interrogation - Nathan considers everyone a suspect without explicitly stating so.

Upon reflection, the family realizes that Cameron was acting suspicious the weeks leading up to his death. At first the family claims it was nothing major, and few people are willing to supply any substantial evidence to suggest that he might take his own life. The uneasiness continues to spread throughout the family, as no answers or significant hints seem to appear. Cameron, on the surface, seemed to have it all together. His farm was profitable year after year, and he was loved by everyone in town. Cameron was even known for his painting ability - his painting of the stockman's grave won an award and hung in the living room like a trophy.

The day after the inspection of Cam's body, the town's main police officer Glenn Mackenna returns to duty, and asks some of the family to go out with him to inspect the scene. Nathan, Bub, Xander and Harry all go out to meet him. To no one's surprise, Mackenna does not see any signs of foul play, and, too, suspects that the heat got to Cameron; it was not an uncommon occurrence. As they leave the scene with, yet again, only questions and no answers, Xander noticed that Harry, who to their knowledge had not been out to the scene of the crime, knew exactly where to turn to find Cameron's car. Nathan, Bub and Xander had missed it the day before when they knew where they were going. With that, the clues begin to flood in.

The family receives a call from Officer Mackenna saying that someone had contacted them asking for Cameron. The call was from Jenna Moore, who was a backpacker visiting when Cameron was only 17. At a party, she and Cameron slept together when she had a boyfriend. After the fact, Jenna claimed that she was raped by Cameron - but that was quickly subdued after Cameron's father scared the backpackers out of town. Their father Carl was an abusive father, and was hated by all the brothers.

The clues continue to trickle in as time passes. Lo claims that Cameron was looking for missing items, and Sophie mentions the backpackers are bad at their job - Nathan thought it was odd Cameron would hire someone unqualified. Ilse speaks to Nathan in private telling him that Nathan had tried to contact Jenna before he died, and even called the hospital - Ilse believed he was trying to a book a hotel attached.

The autopsy results came back and showed nothing, and the family goes ahead with the funeral. On that day, Nathan finds Katy is not doing her job and goes to confront her. She is sick, and tells him that she is pregnant with Cameron's baby. He had forced her to have sex with him multiple times - Cameron's call to the hospital was for an abortion.

That night, Ilse and Nathan have sex - it was not the first time, they had had a past before Cameron had met her. She tells Nathan that she had buried an envelope with all the documents and money that Lo was speaking about at the stockman's grave- hence the hole that Cameron was digging. But when Ilse went back to find the envelope, it was no where to be found.

The next morning Nathan takes the painting off the wall to have a mini-art contest with Cameron's painting and one that Lo made. As he holds up the paintings to the girls he sees an envelope taped behind Cameron's painting. Liz sees this happen, and tells the girls to go play in the yard. She admits to Nathan that she went out by horse and moved Cam's car out of reach. She knew the man he was - it was the same man as her dead husband.

Glenn Mackenna returns calls the house a few hours later. Nathan looks around and he realizes that everyone is happier - the darkness in their life had been liberated. He does not tell him what Liz had just confessed to him; instead, he hangs up the phone and goes out to the yard to play cricket with his family.

More summaries and resources for teaching or studying The Lost Man.