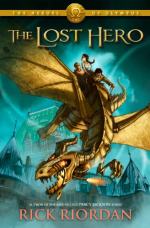 Rick Riordan
This Study Guide consists of approximately 100 pages of chapter summaries, quotes, character analysis, themes, and more - everything you need to sharpen your knowledge of The Lost Hero.

This detailed literature summary also contains Topics for Discussion and a Free Quiz on The Lost Hero by Rick Riordan.

'The Lost Hero' is a story set in the Percy Jackson universe, in which three heroes go on a quest to rescue the goddess Hera, who has been captured by a race of giants. On the way they face many dangers from Greek mythology, including the witch Medea, King Midas, who can turn anything into gold, and man-eating one-eyed giants called Cyclopes. Jason struggles with his lost memories, eventually realizing that he is part of an exchange with a Roman camp of demigods, in an attempt to make the two rival sides reunite together in friendship.

Jason wakes up on a school bus unable to remember anything about his life or who he is. A girl called Piper thinks that he is her boyfriend and Leo thinks that he is his friend, but their teacher, Coach Hedge, does not recognize Jason. While they are at the Grand Canyon, some storm spirits attack and Jason fights back with a magical golden weapon. Coach Hedge reveals that he is a satyr, but is captured by the storm spirits as they retreat. A chariot pulled by winged horses arrives to take the children back to Camp Half Blood.

On the way, a demigod called Annabeth explains that they are all the children of Greek gods and are therefore heroes. She tells them that Camp Half Blood is a place for people like them, where they can train and be protected. When they arrive, Annabeth sends Jason straight to Chiron, their camp director. Leo is claimed as the son of Hephaestus. Annabeth gives Piper a tour of the camp and explains that her relationship with Jason was never real.

Chiron clearly knows who Jason is, but will not reveal his information. He seems to think Jason's presence there is dangerous. Jason has a vision of the goddess Hera, who tells him that she has been captured and needs saving. Around the campfire, Jason shows the camp his powers over lightning and they conclude that he is a son of Zeus. He decides to take Leo and Piper with him on his quest. Piper is claimed by Aphrodite.

Leo manages to fix the mechanical dragon that has been going haywire around the camp. They use it to fly to Canada to ask Boreas, the North Wind, what to do. He tells them to go to Chicago to collect the storm spirits, which they can then take to Aeolus, lord of the winds, as a peace offering. As they are flying towards Chicago, Festus crashes into a motor factory and they are attacked by Cyclopes. They manage to get away thanks to Leo's powers over fire. At Chicago they come up against Medea, an evil witch with the power of charmspeak. They fight her and manage to escape with the storm spirits and Coach Hedge. However, Festus crashes again in the garden of King Midas. Festus is destroyed. King Midas turns Leo and Piper into gold statues and tries to kill Jason, but Jason uses his lightning powers to defeat him and turns his friends back to normal. After King Midas the heroes face a werewolf called Lycaon and his pack of wolves, but they are saved by the Hunters of Artemis. Jason is reunited with his sister Thalia.

They reach Aeolus' palace, but although Aeolus is friendly at first, he changes his mind and sends storm spirits to kill them. They are saved by a friendly aura called Mellie, who cushions their fall as the storm spirits blow them away. They land in California. They decide to try to save Piper's father from the giant who has captured him. They fight the giant and his minions, and manage to save Piper's father. They receive a message from Thalia. She has found Hera but is under attack. They hurry to join her and are soon caught up in the final battle.

While Jason battles the king of the giants, Piper and Leo work together to release Hera from her cage. As she is freed, the king giant retreats back into the earth. Hera destroys the remaining enemies, but accidentally hits Jason in the blast. Piper manages to revive Jason, and Hera returns them to Camp Half Blood.

At Camp Half Blood they discuss the main threat as well as the mystery of who Jason really is. Their main enemy is Gaia, the primordial goddess of the Earth and mother of the giants. She wants to overthrow the gods. It was she who sent all the enemies against them. Jason is actually one of the demigods from the Roman camp. These are heroes who were born when their godly parent was in his or her Roman form. The Romans are enemies of the Greeks, but they will need to work together to defeat Gaia. Hera has performed an exchange; Percy Jackson was sent to the Roman camp and has no memories either. Hera hopes that they will learn to accept each other so that they can work together as allies.

More summaries and resources for teaching or studying The Lost Hero.