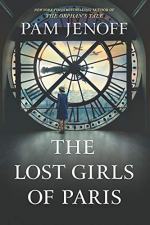 The Lost Girls of Paris Summary & Study Guide includes comprehensive information and analysis to help you understand the book. This study guide contains the following sections:

This detailed literature summary also contains Quotes and a Free Quiz on The Lost Girls of Paris by Pam Jenoff.

The following version of this book was used to create the guide: Jenoff, Pam. The Lost Girls of Paris. Park Row Books, 2019.

Jenoff’s novel, spread over 32 chapters told from three different perspectives, takes place alternately between 1946 and a few years earlier, from 1943 to 1944. The novel begins with Grace, a young woman living in New York City, as she rushed to work after spending the night with a man named Mark. On her way, she found a suitcase and took a folder of military photographs from inside depicting various young women.

Back in 1943, a secretary named Eleanor sat in on a board meeting at the SOE, a secret branch of the British military dedicated to sabotaging Nazi operations in France. She suggested forming a branch of the SOE for training female agents, and the Director agreed. Eleanor soon began recruiting, and a year later found a woman named Marie. Marie, who was fluent in French, was at first hesitant to join because of her young daughter Tess, but soon agreed.

Marie soon began her training in Scotland, where she met other agents such as Josie, who although only 17 years old demonstrated great skill. Josie revealed that she was an exiled princess from India and was searching for her brother. The training progressed, and six weeks into the regimen Eleanor arrived to test Marie’s suitability. After impressing on Marie the importance of knowing her radio equipment inside and out, Eleanor told Josie that she would be deploying immediately.

A few years later, Grace wondered what to do with the suitcase. She attempted to find the owner through the lost and found of Grand Central Station, but was unable to do so. While watching television in a café, she discovered that the woman to whom the suitcase belonged, Eleanor Trigg, had been killed in a car accident earlier that day.

Back in Marie’s time period, she completed her training and awaited deployment at an airfield in England. Eleanor gave her a cyanide capsule in case of her capture, and Marie left for France in a small plane piloted by a man named Will. Will left in her a field, and she proceeded to a nearby farmhouse at the behest of an unknown man who met her. She spent the night inside, wondering whether the man was an enemy or friendly.

In 1946, Grace called the police station and found out Eleanor had no next of kin, and decided to go to the British consulate to find out more information. The consul informed her that Eleanor had worked with the SOE during the war, and that the majority of their files had been sent to Washington after the war. She soon encountered Mark, whom she told about her search. He suggested that she come to Washington with him to find out more about Eleanor and the girls in the photographs.

Back in France a few years before, Marie awoke to the man from the night before knocking on the door of the barn. The man, who turned out to be Vesper, the leader of the spy ring in northern France, took her to a safehouse where she met with Josie and a number of different agents. Vesper, also known as Julian, then brought her to an apartment in a nearby village where she would live and broadcast messages to London.

Grace decided to go to Washington with Mark and use one of his contacts to get into the archives at the Pentagon. While inside, the two found a number of documents, including a list of all the female agents. Next to their names they saw the letters NN, which Mark explained stood for “Nacht und Nebel”, the name of a German program designed to make enemies disappear without a trace. Mark further explained that this likely meant that all the female agents were dead.

After Marie had been in France for a week, Eleanor received a transmission from her stating that she had the radio and could now broadcast messages. Eleanor was unsure whether or not it was Marie or a German imposter sending the message, but elected to trust that it was Marie. Marie, meanwhile, received instructions from Julian to go to Montmartre in Paris and pick up a package to bring back. She did so, and discovered that it was TNT. After evading a police checkpoint on the way back from Montmartre, she demanded to know what the package was for. Julian revealed that he planned to destroy a nearby bridge in order to hamper the German’s defenses before the Allied invasion. He then departed back to England for a week.

Back in Washington, Grace made contact with Annie, the sister of one of the agents, and met her at a hotel bar. Annie revealed that she suspected her sister had been killed because of a compromised radio and a mole within the SOE that had been passing information to the Germans.

Eleanor received another suspicious message missing the required security check, and suggested to the Director that they investigate. The Director refused, however, as the Allied invasion was imminent, and they could not afford a delay. She also met with Julian on his trip back to England, and asked that he investigate Marie’s radio on his return.

Back in France, Marie met with Will who explained that he was to return that night, and that the detonation of the bridge was set for the following night but the agent who was to plant the explosives had gone missing. Marie volunteered to plant the explosives that night instead and meet Will at the airfield. Marie planted the TNT and waited with Will at the airfield, but the plane never arrived. Will suggested they take the plane and leave France, but Marie refused, opting to stay in France to search for Julian. She went to a brothel in Paris used as a safe house by the resistance and stayed for a number of days until two policemen searched the brothel looking for her. Though she evaded capture, she felt she was placing the brothel in too much danger and returned to her flat outside of Paris.

Just as she decided to destroy her radio and return to England, a policeman knocked on her door and arrested her. The policeman took her to the Germany security headquarters, where Hans Kriegler, the head of the SD, interrogated her. He demanded she send an encrypted message to London, and when she refused he revealed he had captured Julian. She agreed to send the message, but Kriegler killed Julian anyway and sent Marie to a prison camp.

Back in London, Eleanor attempted to assess the extent of the German infiltration into their radio network. When she told the Director that two more of her agents had gone silent, he informed her that the female agent program was being scrapped and that she was fired.

In New York City, Grace met with her mother who gave her a check for $10,000 from Grace’s late husband’s Tom. Grace discovered that Eleanor’s effects had been found and returned all the photographs except Josie’s to the British consulate.

A year and a half after her dismissal, and with the war now over, Eleanor returned to the SOE office after a summons from the Director. She found her old offices for the female agent operation burned down, and with it, many of the records. The Director granted her permission to travel through France to discover what happened to the missing girls. Eleanor went to Paris and met with an ex-Resistance fighter named Henri Duquet, who suggested that someone had infiltrated the SOE and compromised the agents. Eleanor resolved to go to Germany, where Hans Kriegler was about to stand trial.

A month after Julian’s death, Marie was in Fresnes prison camp, where she also found Josie near death. The Germans move the prisoners into a boxcar, but during the journey the resistance blew up the tracks and the prisoners begin to escape. Too weak to flee, Josie detonated a grenade, killing herself and some Germans as Marie fled.

Eleanor arrived in Germany and interviewed Kriegler at the Dachau camp, where he waited to stand trial. He told Eleanor that he killed Julian, but that Marie may still be alive. He also gave her a key to a safety deposit box in Zurich. She went to Switzerland and discovered a transcript confirming that someone within the SOE knew that the radios were compromised but continued sending sensitive information anyway. Eleanor then returned to the SOE and confronted the Director, who revealed that the British government had known about the compromise but had used it to feed the Germans false information at the expense of the female agents’ lives. He also told her that Marie had come to see him, and he had given her visa papers to New York City. Eleanor made her way to New York and arranged to meet Marie, but before she could Eleanor was killed in a car accident whereupon Grace found her suitcase.

Grace also found Marie’s address through a contact in the immigration department and went to her Brooklyn apartment. Together, they resolved to bring to light Eleanor’s role in protecting the agents and reveal the sacrifice the British government made in the war. Grace, now content to be shut of the matter, returns to her normal life, optimistic about her outlook.

The Lost Girls of Paris from BookRags. (c)2022 BookRags, Inc. All rights reserved.