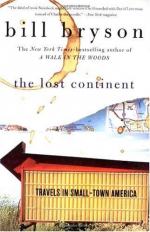 Bill Bryson
This Study Guide consists of approximately 29 pages of chapter summaries, quotes, character analysis, themes, and more - everything you need to sharpen your knowledge of The Lost Continent.

This detailed literature summary also contains Topics for Discussion and a Free Quiz on The Lost Continent: Travels in Small-town America by Bill Bryson.

Bill Bryson, who grew up in Des Moines, Iowa, says that someone had to be from Des Moines. He says people there either accept the fact that they'll marry a local girl and work at Firestone or they spend years moaning about the place and grow up to marry a local girl and work at Firestone. Bryson, a writer, decides to take a long circuitous journey through many of the states, recording his observations along the way. He does so with wit and sometimes wisdom, implanting stories from his own life along the way.

Bryson's travels are divided into two sections - East and West. He first travels eastward, finding an array of towns, historical sites and interesting people. He says that he is searching for the perfect town but soon admits that he's not going to find it in a single location. With that in mind, he begins finding pieces of that perfect town with the intention of putting them all together once he has the pieces.

Bryson's travels include Missouri, Tennessee, North Carolina and Kentucky before he moves northward. In Washington, D.C., he's disappointed to find that the Smithsonian Institute has been divided into a number of smaller buildings, each with a particular theme. While he says he is still interested in the place, there's no longer a sense of discovery at what might be found around the next corner. He finds that, however, at the Henry Ford Museum in Detroit, much later during his journey.

He has held to the idea that the New England states would be graceful places, filled with pretty scenes and clapboard churches. Again he's disappointed and hates those cities that have turned into tourist traps, selling crappy sweatshirts and high-priced tickets to disappointing attractions.

As he travels westward, Bryson writes that he hates the dull flatness of Kansas and can't imagine why the settlers ever stopped there. His route is interrupted by snow and he turns south from his position in Colorado, eventually making it to New Mexico where he spends a day with his niece in Santa Fe. A section of California that he'd looked forward to turns out to be incredibly boring and he's appalled at the haphazard car of the Yosemite National Park. He recalls being awed by the Grand Canyon as a child but is met with an overcast sky that prohibits a clear view on this trip. Through the shabbiest town he encounters - Wells, Nevada - to the casinos and nightlife of Vegas, Bryson's details and observations continue as he travels.

When he nears Des Moines, he realizes that his trip is soon to come to an end. Having traveled more than 13,000 miles, he enters Des Moines - the town he'd vowed to leave as a child - and realizes that he could be happy living there.

More summaries and resources for teaching or studying The Lost Continent: Travels in Small-town America.