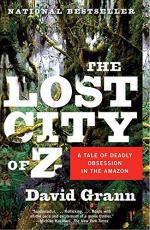 Related Topics
Killers of the Flower Moon: The Osage Murders and the Birth of the FBI

David Grann
This Study Guide consists of approximately 39 pages of chapter summaries, quotes, character analysis, themes, and more - everything you need to sharpen your knowledge of The Lost City of Z.

The Lost City of Z Summary & Study Guide includes comprehensive information and analysis to help you understand the book. This study guide contains the following sections:

This detailed literature summary also contains Topics for Discussion on The Lost City of Z by David Grann.

The following version of this book was used to create this study guide: Grann, David. The Lost City of Z. Vintage Departures. First Edition.

The book opens with a prologue about the author's journey into the Amazon. His mission is to find out the truth about what happened to Colonel Percy Fawcett, a 1920s British explorer who vanished with his son, Jack, during an expedition into the jungle to find a fabled lost city called “Z.” The narrative shifts to a chapter describing Fawcett's last days in American society, where Fawcett and Jack left New Jersey to great fanfare. The story is then told from the beginning of Percy Fawcett's life and the author's personal quest to solve Fawcett's mystery.

Fawcett was born in Victorian England. He had a need for physical adventure that was stifled by his cold parents and his repressive era. Fawcett later joined the military and was stationed in Ceylon (formerly Sri Lanka), where he met his future wife, Nina, and discovered his love for exploration. He joined the Royal Geographical Society and trained to be a formal explorer. During these chapters, the author describes his growing obsession with Fawcett and how many Fawcett seekers met their doom trying to find out the truth about him. He tells the story of James Lynch, a Brazilian banker who was kidnapped by native tribes with his son during one such Fawcett search. The author admits he has never even gone camping but he will go to the Amazon to research Fawcett and The Lost City of Z.

In 1905, Fawcett was commissioned to map the Peru-Bolivian border in the Amazon. His first expedition in the jungle was beset by disaster, with tribes and environments that strived to kill him and his party. Fawcett succeeded at his quest a year ahead of time. Fawcett returned to the Amazon to locate the source of the Rio Verde, but the mission was more disastrous than his first. Many died along the way. Over the next several years, Fawcett constantly journeyed into the jungle for months and years a time. The missions were always perilous; Fawcett and arctic explorer James Murray fought during an entire trip. There was a major financial and emotional strain on his family, especially for Nina. She wanted to join her husband on his journeys but she was barred because of society's sexism. She put her hopes and dreams in her son Jack. During these chapters, the author prepares for his trip and researches Fawcett's final letters. He learns about Fawcett's real route to Z on his last quest.

Based on Fawcett's various artifact discoveries, he developed a theory that an ancient sophisticated society once existed in the Amazon. He called it “Z” and made it his life's goal to discover the ruins, which he believed would immortalize him. Fawcett's chief rival in this quest was an affluent explorer named Dr. Alexander Hamilton Rice. Rice's funding allowed him to cover wide areas of the Amazon and Fawcett feared Rice would find Z before he could.

Fawcett fought in World War One, where he saw European atrocities that made the Amazon's savagery pale in comparison. It challenged everything he believed about the white man's superiority.

Over the next few years, Fawcett intensified his search for Z to his family's cost. They were soon bankrupt and he had still not found the city. Although he could not get funding because no one in Britain believed in Z, Fawcett was finally able to secure funding from America for his last attempt. Jack and his best friend Raleigh Rimell accompanied Fawcett into the jungle, the infamous final expedition where the party vanished. Witnesses and last letters of correspondence revealed how their party was marked by naivety and disillusion. Raleigh broke down early on and wanted to go home. They were last seen venturing into hostile native territory.

The author travels to Brazil and secures a guide. His first foray into the jungle teaches him how faraway rock formations can be mistaken for ancient ruins, leading him to believe Fawcett was mistaken about Z. The author is introduced to the chief of a Xingu River tribe who agrees to share what he knows about Fawcett in exchange for a reward. They travel to a Xingu village where natives live according to their ancient customs. The chief confesses that his tribe once lied about discovering Fawcett's remains for a reward. The author makes the acquaintance of an anthropologist named Michael Heckenberger in the Xingu village; Heckenberger shows the author the remnants of an ancient civilization that once flourished in the jungle, its traces now practically invisible. The author is floored by the discovery, which challenges long-held notions of Amazonian civilizations, like Fawcett strove to do.

More summaries and resources for teaching or studying The Lost City of Z.

The Lost City of Z from BookRags. (c)2022 BookRags, Inc. All rights reserved.