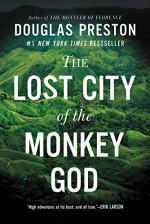 Summary
+Chapters Summary and Analysis
Chapter 1: The Gates of Hell
Chapter 2: Somewhere in the Americas
Chapter 3: The Devil Had Killed Him
Chapter 4: A Land of Cruel Jungles
Chapter 5: One of the Few Remaining Mysteries
Chapter 6: The Heart of Darkness
Chapter 7: The Fish that Swallowed the Whale
Chapter 9: Something that Nobody Had Done
Chapter 10: The Most Dangerous Place on the Planet
Chapter 11: Uncharted Territory
Chapter 12: No Coincidences
Chapter 13: Fer-de-Lance
Chapter 14: Don't Pick the Flowers
Chapter 15: Human Hands
Chapter 16: I'm Going Down
Chapter 17: A Bewitchment Place
Chapter 18: Quagmire
Chapter 19: Controversy
Chapter 20: The Cave of the Glowing Skulls
Chapter 21: The Symbol of Death
Chapter 22: They Came to Wither the Flowers
Chapter 23: White Leprosy
Chapter 24: The National Institutes of Health
Chapter 25: An Isolated Species
Chapter 26: La Ciudad del Jaguar
Chapter 27: We Became Orphans
Important People
Objects/Places
Themes
Styles
Quotes
Topics for Discussion
Order our The Lost City of the Monkey God Study Guide

The Lost City of the Monkey God Summary & Study Guide

Preston, Douglas
This Study Guide consists of approximately 69 pages of chapter summaries, quotes, character analysis, themes, and more - everything you need to sharpen your knowledge of The Lost City of the Monkey God.

The Lost City of the Monkey God Summary & Study Guide includes comprehensive information and analysis to help you understand the book. This study guide contains the following sections:

This detailed literature summary also contains Topics for Discussion on The Lost City of the Monkey God by Preston, Douglas .

This summary refers to Douglas Preston's Lost City of the Monkey God, published by Hachette Book Group in 2017.

Preston's book is a first-hand account of a dangerous expedition into the heart of Mosquitia, an area of Honduras, to find the lost city, alternatively called the White City and the Lost City of the Monkey God, that has long been rumored to exist there. Preston begins his narrative in when the expedition is in Catacamas, Honduras, a dangerous city controlled by drug dealers from which they will leave to enter the rainforest. There, they hear about the dangers of the trip ahead, including venomous snakes, scorpions and spiders, and deadly diseases. The author then recounts his first encounter with Steve Elkins, the cinematographer and adventurer whose dream it is to find the lost city.

The author then delves into the long history of the myth making that has surrounded the lost city for hundreds of years, dating back to Cortes. He includes the strange stories of hucksters, such as Thedore Morde, who ventured into Honduras in 1940 and who claimed to have found a remarkable city ruled over by the statue of a monkey god. Despite Morde's popularity with the press at the time, his stories, as Preston reveals, were frauds--something that Preston realizes when he gets his hands on Morde's journals.

Preston then returns to Steve Elkins's long and difficult twenty-year quest to produce a lidar, or radar map, of the area called T! in Honduras where he thinks the lost city might be located and the remarkable finds that the lidar map reveals. He covers the expedition into the Edenic-like T1 in 2015, in which the group makes remarkable finds connected to an unknown civilization that was distinct from the Maya. He then, like many members of the expedition, is struck by leishmaniasis, caused by sand flies that inject parasites into humans. He recounts his treatment for the disease at the National Institutes of Health and then connects his experience with the disease to the experiences of New World people who died in droves when they faced Old World diseases that Europeans brought to the New World and against which they had no resistance. He concludes his tale with a warning about the impermanence of even great civilizations and the dangers that diseases pose for the modern world.

More summaries and resources for teaching or studying The Lost City of the Monkey God.

The Lost City of the Monkey God from BookRags. (c)2022 BookRags, Inc. All rights reserved.