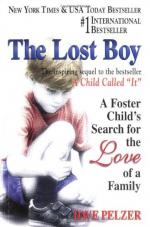 Dave Pelzer
This Study Guide consists of approximately 37 pages of chapter summaries, quotes, character analysis, themes, and more - everything you need to sharpen your knowledge of The Lost Boy.

This detailed literature summary also contains Topics for Discussion and a Free Quiz on The Lost Boy by Dave Pelzer.

David Pelzer is a child taken into the foster care system at age twelve, though he had spent years being tortured and tormented by his mother. David is one of five sons and there's no real indication why he was singled out for his mother's attention. David's father is present during his early years, though he wants peace in his household at any cost—even if it means David is being beaten and tormented.

David's torment ranges from emotional to physical. David says that his mother is "playing a game," and that the key to his survival is to play by her rules. For example, she pulls on his ear but he isn't allowed to flinch. Jerking away from her earns David another slap. As is typical of many abused children, David seeks his mother's approval despite the abuse. When he's nine, his mother kicks him out of the house. The police pick him up and David has the opportunity to tell of the abuse, but doesn't. David's teachers finally take action. It seems likely that David's mother has severely burned his arm on a gas stove, and that's the reason the teachers alert the authorities. As David is taken into the foster child system, he doesn't know what to expect and spends much of his time worrying that his mother will return for him. Conversely, he desperately misses his mother and wants his mother's love. He takes an opportunity to go by his mother's house and is both disappointed and confused when he's told he isn't allowed to contact her.

David moves through a series of foster homes over the years until he turns eighteen. He isn't always happy in the foster homes, but is always better off than he had been with his mother. At one point, when David is in trouble with a foster mother, he says that it's an "interesting" situation. He knows he's in serious trouble, but knows that his foster parents won't beat him. He wonders what they could possibly do to him. When he's grounded, he isn't certain what the term means and figures that it's not a bad deal.

David goes through a rebellious phase and gets into trouble several times. The most serious legal scrapes include a plan with another boy to set a school on fire and a series of thefts. He spends some time in a juvenile lock-up facility and says he feels that the routine of that place is easier to manage than life "outside" the facility.

David finally finds his way, though the road is not without a series of bumps. David does bond with several of his foster parents as well as social workers and friends. It's those bonds that finally help David find his way. David eventually gets his G.E.D. then joins the Air Force where he apparently distinguishes himself. The final notation of the book is that David is with his son, Stephen, and that he has a family of his own.

More summaries and resources for teaching or studying The Lost Boy.