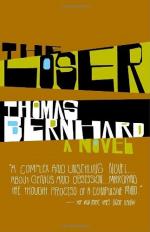 Get The Loser from Amazon.com
View the Study Pack
View the Lesson Plans
Study Guide
Order our The Loser Study Guide

Thomas Bernhard
This Study Guide consists of approximately 38 pages of chapter summaries, quotes, character analysis, themes, and more - everything you need to sharpen your knowledge of The Loser.

The Loser Summary & Study Guide includes comprehensive information and analysis to help you understand the book. This study guide contains the following sections:

This detailed literature summary also contains Topics for Discussion and a Free Quiz on The Loser by Thomas Bernhard.

The Loser by Thomas Bernhard is a series of ruminations and recollections about the relationships between three main characters: the narrator, Glenn Gould and Wertheimer. After Glenn Gould's death and Wertheimer's suicide, the narrator travels to Wertheimer's hunting-lodge in Traich where he ponders how meeting Glenn Gould has affected Wertheimer and himself during the last three decades. He comes to the conclusion that even though Glenn Gould's musical genius inspires them, it ruins their own talents since they can never reach the same level of expertise as their friend. This ultimately leads to Wertheimer's suicide and the narrator's depression. The Loser represents the thought processes of a maddened former piano virtuoso, tormented by his failure which results from his inability to surpass his friend's talent. It is also a study into the psyche of a trio of friends with similar aspirations which only one of them manages to achieve.

The narrator enters an inn in Wankham, thinking about Wertheimer's suicide and Glenn Gould's death as well as the relationships between the three men. The narrator, Wertheimer and Glenn Gould meet while taking Horowitz's piano course at the Mozarteum in Salzburg during the summer of 1953. Deciding that Salzburg is not congenial to an artistic lifestyle, the trio rent a house in Leopoldskron together. All three men come from wealthy families who disapprove of their sons studying music with aspirations of becoming piano virtuosos. During the summer, Glenn Gould's genius discourages Wertheimer and the narrator since they can never reach his level of piano playing. Once the course is completed, Glenn Gould returns to his home in Canada, and the narrator and Wertheimer fear that they will never see their friend again.

After some time passes, the narrator and Wertheimer visit Glenn Gould and spend several months in New York City. Glenn Gould is famous by this time as a talented piano virtuoso, though he lives in seclusion. Meanwhile, the narrator and Wertheimer have given up playing the piano; the narrator studies philosophy while Wertheimer takes up the human sciences. The narrator has quit to the point of giving his Steinway to a schoolteacher's untalented nine year old daughter who promptly ruins the expensive instrument. Wertheimer is forced to move to Traich, in the country, for his health; here, he lives with his sister, dictating every aspect of her life. Glenn Gould dies from a stroke, and his death greatly upsets Wertheimer. Wertheimer is further disconcerted when his sister marries a Swiss man, converts to Catholicism and abandons him. Wertheimer hangs himself near his sister's house in Chur. The narrator attends the private funeral which consists of only himself, Wertheimer's sister and her husband. Afterwards, he refuses to have lunch with Wertheimer's sister and her husband.

The narrator feels very guilty about Wertheimer's death because he ignored his friend's last five letters inviting him to Traich for a visit. He travels toward Traich with the intent of visiting Wertheimer's lodge and searching for notes that his friend might have left; he hopes these notes may help him with a book he is writing, "About Glenn Gould." At the inn in Wankham, the narrator talks to the innkeeper and learns that Wertheimer had several guests simultaneously shortly before his suicide. When the narrator goes to Wertheimer's lodge, he encounters the groundskeeper, Franz Kohlroser who tells him about Wertheimer's last several weeks of life. Shortly before going to Chur to commit suicide, Wertheimer burns all of his notes and orders an out-of-tune piano. He invites many musical guests whom he studied with at the Mozarteum, playing horrendously for them and bribing them to stay. Eventually, Wertheimer insists his guests leave immediately and locks himself in his room for several days before journeying to Chur. The narrator sits alone in Wertheimer's room, listening to a record of Glenn Gould playing "Goldberg Variations."