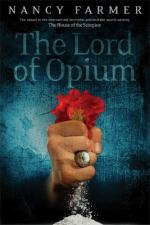 Nancy Farmer
This Study Guide consists of approximately 87 pages of chapter summaries, quotes, character analysis, themes, and more - everything you need to sharpen your knowledge of The Lord of Opium.

The Lord of Opium Summary & Study Guide includes comprehensive information and analysis to help you understand the book. This study guide contains the following sections:

This detailed literature summary also contains Quotes and a Free Quiz on The Lord of Opium by Nancy Farmer.

Matteo Alarcan, only 14 years old, awakened in his favorite camping spot after fleeing El Patron’s funeral. Only his Safe Horse accompanied him; the majority of his acquaintances drank poison at the funeral and died. Among those dead were Matt’s bodyguard Tam Lin, and the entire Mendoza family except for Maria and her mother Esperanza, who fled to the convent. Matt made his way from his camping spot back to his house, the former El Patron’s hacienda, considering the task before him - to run a drug empire. Nobody expected Matt to have the job. He mourned the loss of his friends and the heavy weight on him.

Once arrived at the hacienda, Matt found his old foster mother, Celia, cooking in the kitchen for him. He was pleased to find someone familiar that he felt was an ally. However, she was with a UN pilot, Major Beltran, who immediately began bullying Matt about opening the borders of the country. Opium’s borders were mechanically closed by a force field when El Patron died, and it was suspected that only Matt could open them.

Matt spent a first uncomfortable night in El Patron’s room, dealing with unresponsive eejits (controlled human slaves). There was one servant girl he liked; he called her Mirasol. The next morning he had El Patron’s rooms cleaned and met Cienfuegos, the head of the Farm Patrol - the group of men who oversee the opium farms and the eejits. Cienfuegos told Matt of the challenges of running the country: the most pressing needs were the closed borders, and the surrounding countries in the Dope Confederacy had all fallen to the African drug lord Glass Eye Dabengwa.

It was difficult for Matt to decide if he trusted Cienfuegos, but they talk further of Matt’s plans to free the eejit population so they could think for themselves. Regarding this goal, nobody was very encouraging. All attempts to pull the microchips from the eejits’ brains had failed.

The new patron went about his business for weeks in this manner; spending all of his time with either Celia or Cienfuegos and avoiding speaking to anyone on the holoport. The opium started to pile up, as they weren’t shipping any of the drugs out of the country. Matt made a deal with the UN via Esperanza Mendoza to provide plants and animals from the still-healthy Opium in return for brain surgeons to help him with his eejits.

After several weeks, Matt fell ill with scarlet fever and was transferred via hovercraft to the main hospital in Paradise, a city across the country from Ajo. There he met Dr. Rivas, basically the only doctor left after El Patron killed so many at his funeral. Dr. Rivas appeared at first to be kind and helpful; he treated Matt for his illness and showed him the beauty of the city’s gardens and fountains. One day while walking around the grounds, Matt met three children. Listen was a young African girl, a clone of Glass Eye Dabengwa’s favorite wife. Mbongeni was a six-year-old with a baby’s mind, and was a clone of Glass Eye himself. El Bicho, 'the bug' was another clone of El Patron, and of Matt. He was a violent child that wanted nothing more than to visit El Patron's space station, The Scorpion Star. Matt was horrified that they were still making clones. He decided to bring Listen home with him to Ajo.

On the trip back to Ajo, Cienfuegos took Matt to the Alacran Biosphere, a collection of ecosystems that El Patron built as a model for his space station. It had been running continually for four generations; many of its inhabitants didn't even realize there was a world outside. Inside there were pristine ecosystems modeled after those on earth. Matt and Cienfuegos take some mushroom samples - mushrooms that were meant to kill pollution from the soil - and leave.

When he returned to Ajo, Matt planned to have his friends Chacho, Ton-Ton, and Fidelito visit him. He planned a party around them, with lots of fun things. They came with a nun from from the convent, but not with Maria. Maria and Matt had had a few holoport conversations. They had declared their feelings for each other, and it only remained for her to come to Ajo with him. She promised she would as soon as she could. The boys were delighted with Matt's wealth in Ajo and enjoyed all of the fun Matt planned. They learned that Chacho's father was in Ajo - he was an eejit, the guitar master. Matt had renewed reason to free the eejits.

Esperanza's doctors had arrived, and they were in Paradise and Ajo working at Matt's request on the eejit problem, with no success. Cienfuegos met with the Mushroom man from the biosphere weekly and was seeing some success in ridding the fields of pollution - soon the ground would be ready to grow something other than Opium, if they could get the eejits to learn how to harvest a different crop.

Matt learned that Mirasol loved to dance. He could play certain music tracks and she would actually go through the dance steps. She would dance and then faint; twice, Matt kissed her to revive her from her sleep. The little girl Listen saw this dancing happen one day, and weeks later, when Matt was away, put on all of the music boxes to try to wake Mirasol up. As a result, Mirasol "went rogue", meaning her mind broke under the strain of trying to cut through the microchipping and have lucid thoughts. The girl yelled and thrashed and fell into a coma, and then she died. Her death caused Matt to fall into a stupor for weeks, because he had failed to save her.

After a few weeks, Matt flew to Paradise to speak to Maria on the holoport there. While in Paradise they decided to visit the telescope observatory, which was built to watch The Scorpion Star. At the observatory they noticed a tunnel underground with a forbidding looking door emblazoned with a red scorpion. They surmise that The Scorpion Star had something to do with the eejits' microchips. The next day Matt dialed Maria on the holoport; she hurled herself into the holoport, which was a cold hole through space, and into Paradise with Matt. The move caused her to spend several days in a coma in the hospital. Matt stayed by her side the entire time.

During the time that Matt was occupied with Maria, El Bicho tried, at Dr. Rivas's urging, to open Opium's borders. This allowed Glass Eye Dabengwa and some of his soldiers to enter the country in an attempt to take over. Matt was able to close the border before too many troops came through, but it was too late; they were under attack.

Matt and Listen were captured and held captive for a few days. They were taken to see Glass Eye himself, who had just had surgery to get new eyes. He threatened to force Matt to open the borders. Matt and Listen were taken to see Glass Eye a second time; again, he demanded that Matt open the borders, threatening to harm Listen if Matt didn't comply. Glass Eye had already killed Dr. Rivas. Matt shined his ultra-bright flashlight in Glass Eye's fake eyes - the man was so old and made of so many imperfect body parts, that this killed him. Matt found Cienfuegos nearby, pretending to be an eejit, and the escape with Listen.

They knew they needed to go to the room beneath the Scorpion Star. They took Listen to the observatory and found Dr. Rivas's grown children, Angel and Marcos, forcing eejits to try to open the forbidding door. Matt and Cienfuegos tried to sneak away, but were caught. Cienfuegos was shot and they took Matt to force him to open the door. They learn from Angel Rivas that the room holds tons of treasure, with with she planned on taking over Opium with Glass Eye's soldier army.

Matt pressed his hand to the Scorpion symbol and the door opened. There was, as Angel said, tons and tons of treasure. Angel and her brother and the soldiers followed Matt inside, exclaiming over the riches. When Matt turned to leave he noticed a diagram on the wall of the Scorpion Star, beneath two large buttons that said 'uncouple' and 'couple'. Pondering the meaning of the words, Matt pressed the 'Uncouple' button. He closed the door behind him, and went to get Listen and Cienfuegos.

Cienfuegos was alive, but barely. When Matt got them out of the observatory he noticed that the eejits were all awake, wandering around the property talking and wondering what had happened to him. His work in the underground room had freed them.

Matt went back to the hospital to see that Cienfuegos was taken care of. The story ended with Matt and Maria rebuilding Opium with free people, good crops, an end to the drug trade, and a promise to make the country a good place.

More summaries and resources for teaching or studying The Lord of Opium.

The Lord of Opium from BookRags. (c)2022 BookRags, Inc. All rights reserved.