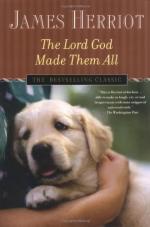 The Lord God Made Them All Topics for Discussion

James Herriot
This Study Guide consists of approximately 39 pages of chapter summaries, quotes, character analysis, themes, and more - everything you need to sharpen your knowledge of The Lord God Made Them All.

Consider Herriot's voyage to Russia. Research the political tone and situation of Russia immediately following World War II. Why was this trip considered to be such a dangerous trip at the time that Herriot went?

Discuss the way Herriot presents himself in his writing. What does he convey about his personality, work ability, etc.?

Discuss the way Herriot presents the people whom he meets in his writing. Is he judgmental of them? Does he paint a fair portrait of their actions and personalities? Do you believe any of his characters would be offended by the way he presents them in his stories? Defend your answer.

Do you approve of Herriot's decision to discourage his daughter from becoming a veterinarian? Why or why not?

Consider the scene where Herriot is trying to remove a thorn from a dog's paw when his son climbs up the...

More summaries and resources for teaching or studying The Lord God Made Them All.

The Lord God Made Them All from BookRags. (c)2022 BookRags, Inc. All rights reserved.