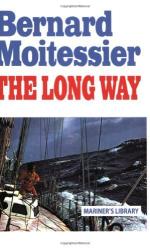 Bernard Moitessier
This Study Guide consists of approximately 32 pages of chapter summaries, quotes, character analysis, themes, and more - everything you need to sharpen your knowledge of The Long Way.

This detailed literature summary also contains Topics for Discussion on The Long Way by Bernard Moitessier.

The author, Bernard Moitessier prepares to sail solo around the world from Plymouth England in late August 1968. He enters a race sponsored by the Sunday Times. Other of Bernard's sailor friends enter the race including Bill King and Loick Fougeron. Bernard begins the trip fairly depressed, but seems to derive energy from watching his boat Joshua being followed by flying fish and barracudas. Bernard cannot establish direct communication with the island of Trinidad, but hopes that his sighting will at least be reported to Lloyd's Agency. The boat Joshua seems to enjoy the trip, but sometimes encourages Bernard to sail it too fast in rough weather. This contributes to a 60-degree knockdown, though with few ill-effects. Bernard throws off more extra gear and weight while approaching the dangerous waters of the Cape of Good Hope. He does sail into South Africa's Walker Bay and is able to get close to a freighter and throw it a package of pictures and material and also a request to contact the Sunday Times. In the process, Joshua is damaged by a passing collision with the freighter and damage to the bowsprit. The damage seems irreparable, but Bernard thinks of his sailor friend Henry Wakelam and is able fix the bowsprit in a couple of days.

There are other dangerous moments, but soon Bernard is able to drink a bottle of champagne to celebrate passing the vicinity of the Cape of Good Hope. By the end of October he is cruising into the Indian Ocean. The weather is mild in November and Bernard enjoys watching and feeding the sea birds. Joshua rapidly approaches Australia as Bernard takes up his time feeding and filming the shearwater birds. Bernard thinks of his youth sailing in the Gulf of Siam and the natural signs he learned about the behavior of the sea. South of Australia, Bernard nears the port of Hobart in Tasmania and sails close to a small fishing boat. He has a conversation with the fishermen and gives them photos of his log and other materials to bring to the Hobart Yacht Club. He asks them of the other sailors in the "Long Way" contests, but only hears of a lone sailor that rounded New Zealand recently. Bernard celebrates Christmas as he passes New Zealand, and feels that porpoises alongside Joshua guide the ship away from dangerous reefs and into the Pacific Ocean.

As he prepares to round Cape Horn, Bernard fears icebergs. His yoga exercises and varied diet make him feel strong enough to continue his voyage, but he decides that he does not want to sail back to England. The ride past Cape Horn is rough and exciting and Bernard must force himself to reef in Joshua's sail to avoid capsizing. By early March, Joshua is approaching the Cape of Good Hope for the second time in the voyage. There is rough weather in the southern hemisphere winter and there are four more knockdowns of Joshua. Bernard is heading for Tahiti and feels an increasing resentment of the "Monster" of civilization. He flirts with the idea of going to the primitive Galapagos Islands but decides this would be wrong. On arriving in Tahiti, Bernard meets old friends. He confronts what he feels to be over-development of the harbor and identifies with a persecuted rat on the harbor rocks. Bernard asks people, including, in an imaginary meeting, the Pope, to care for and to preserve the Earth and the oceans.

More summaries and resources for teaching or studying The Long Way.