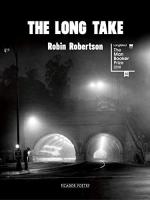 Robin Robertson
This Study Guide consists of approximately 49 pages of chapter summaries, quotes, character analysis, themes, and more - everything you need to sharpen your knowledge of The Long Take.

This detailed literature summary also contains Quotes and a Free Quiz on The Long Take by Robin Robertson.

The following version of this book was used to create this study guide: Robertson, Robin. The Long Take. London: Picador, 2018.

The Long Take is a book-length narrative poem centered around a man named Walker, a veteran of World War II who has just returned from overseas. In Part I, Walker arrives in New York City in 1946. He is originally from a small town called Broad Cove in Nova Scotia, Canada, but has always wanted to see the United States. Walker gets a job at the fish market, which reminds him of home, where he worked as a fisherman, and finds a room in a boardinghouse. However, he feels haunted by his experiences in the war. He is prone to panic attacks and flashbacks, symptoms of post-traumatic stress disorder (PTSD), and he drinks heavily to cope. He walks the city at night, taking in the sights, watching film noir movies, and reflecting on the past. Walker had a girlfriend back in Broad Cove named Annie MacLeod, but he feels as though he cannot return to her; he does not want to be a burden to his loved ones and feels ashamed of the man he has become. One night, Walker meets a director filming a movie in New York. He tells Walker he is returning to Los Angeles, and Walker decides he will also go to L.A. He buys a cross-country train ticket.

In Part II, Walker takes the train to Los Angeles. Two years passed in Part I, and it is now 1948. In Los Angeles, Walker discovers a large homeless population living on Skid Row. Many of these people are veterans, like him. He befriends one of the homeless vets, a man named Billy Idaho, who advises him to look for rooming accommodations in the neighborhood of Bunker Hill, and to look for a job at the local newspapers. Walker moves into a boardinghouse and is hired by a newspaper called the Press to work on the local city section. He is partnered with two established journalists named Rennert and Sherwood who show him around the city and describe the murder scenes they have visited, many of which were the result of mob activity. Walker continues to drink heavily and wander the streets at night, just as he did in New York. He watches several more noir movies, and even witnesses some being filmed around the city. Walker gets along with Rennert and Sherwood, but he detests a young upstart at the Press named Pike, who is overly-ambitious. Billy informs Walker that the situation for the homeless in the city is dire, and Walker pitches an idea for an article to his editor about this devastating phenomenon. The editor suggests Walker go to San Francisco for research, as homelessness is a serious problem there as well.

In Part III, it is now 1951 and Walker arrives in San Francisco. The conditions are similar to those in L.A. and Walker interviews several homeless veterans who claim that they have not been able to find employment since returning from the war. Walker continues to frequent bars and roam the streets in a fog of depression and anxiety. He witnesses a deadly stabbing in an alley and has nightmares and flashbacks about the war. He writes postcards to Annie MacLeod, which he is unlikely to ever send.

In Part IV, Walker returns to Los Angeles. It is 1953. He finds Billy and discovers that he is looking increasingly more haggard. He also meets a film director, Joseph H. Lewis, and has a drink with him in a bar. As Lewis leaves, Walker watches him walk by Pike, his co-worker from the Press. He overhears Pike call Lewis a Jewish slur. He runs into Billy again, who introduces him to another veteran named Frank, whose face is badly scarred from being tortured. Frank mentions the name of the unit of Germans that hurt him – the Hitlerjugend – and Walker faints. When he awakens, he tells Billy that this was the same unit that killed nearly all of the men he was serving with.

As the book reaches its climax, Los Angeles undergoes a major reconstruction project in which buildings are being toppled all around town, many replaced with parking lots or highways. Wildfires rage in the distant mountains, further enhancing the apocalyptic atmosphere. Scenes of the razing of the city alternate with Walker's memories from the war. After escaping the Battle of Normandy, Walker took refuge in a house in nearby Falaise, watching from a rooftop as the Germans executed his platoon. He was finally able to sneak out of the house and get away, and when he happened upon a lone German soldier, he brutally killed and mutilated the man. Walker tells this story to Frank, who responds that Walker is no better than the Germans.

As the book comes to a close, Walker sees his friend Billy murdered in the street, set on fire by mobsters that he owed money to. Pike is suddenly beside him, and he makes another racially-intolerant remark. Walker pulls out a knife, but instead of stabbing Pike, he drops it down a storm drain. He goes to Billy's usual corner on Skid Row and declares, “I can stop now...I'll make my city here” (226), seemingly resigned to become another homeless veteran among the group, abandoning his pursuit of a productive life.

More summaries and resources for teaching or studying The Long Take.