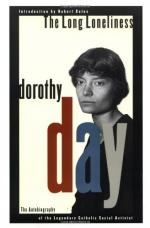 Dorothy Day
This Study Guide consists of approximately 26 pages of chapter summaries, quotes, character analysis, themes, and more - everything you need to sharpen your knowledge of The Long Loneliness.

The Long Loneliness: The Autobiography of Dorothy Day Summary & Study Guide includes comprehensive information and analysis to help you understand the book. This study guide contains the following sections:

This detailed literature summary also contains Topics for Discussion and a Free Quiz on The Long Loneliness: The Autobiography of Dorothy Day by Dorothy Day.

The Long Loneliness is the autobiography of Dorothy Day (1891-1980) who was a devout convert to Catholicism, anarchist, distributivist, social activist and American journalist. She is famous not only for her writing and social activism but for founding the newspaper The Catholic Worker with her friend Peter Maurin, which advocated nonviolence, simple living, and aid for the poor. The "long loneliness" is a state of loneliness Day often experienced as a child and young adult, which only her conversion to Roman Catholicism and experience in communities of the poor could cure. She also argues throughout the book that the "long loneliness" is universal in human experience and can only be cured by community life.

Day's autobiography is divided into three broad sections. Part One, "Searching," introduces her childhood and adolescence along with her interest in religion which began at a very early age. She spends time talking about her family and their religious practices, introducing neighbors and family life. Her family moved often and she grew up in San Francisco and Chicago. In 1914, Day went to university on her own, to the University of Illinois at Urbana-Champaign, but left after two years to return to New York City. While she was a talented writer and very intellectual, she had trouble focusing on her studies and was instead attracted to radical political philosophies like socialist, pacifism and anarchism. Consequently, she spent most of her time living on small amounts of money and working for a number of socialists.

Part Two, "Natural Happiness" describes her marriage, motherhood and conversion. In her early adult years, Day rejected religion as an opiate of the people but was nonetheless drawn to it. She lived a rather "bohemian" life at that time, engaging in two common-law marriages. Her second husband, Forster, was a quiet and radical anarchist who desired to live apart from society. Their daughter, Tamar Day, was a pivotal event in Day's life. She decided that she must become Catholic and that Tamar must be baptized and she knew that her husband may well leave her over it, leading her to feel that she must choose between God and family. She chose God and eventually Forster left. Thus, she started her spiritual awakening and converted in late 1927. She then started writing for Catholic publications like America and the Commonweal.

Part Three, "Love is the Measure," discusses meeting Peter Maurin when she arrived in New York City and their common philosophical and social ideas. Together they founded the Catholic Worker newspaper, which they used to promote Catholic social teaching, anti-statist communitarian and agrarian forms of life and pacifism. The newspaper was such a success that a "house of hospitality" grew out of it in the New York City area and also produced a number of communal farms. The movement spread all over the world and exists to this day.

More summaries and resources for teaching or studying The Long Loneliness: The Autobiography of Dorothy Day.

The Long Loneliness: The Autobiography of Dorothy Day from BookRags. (c)2022 BookRags, Inc. All rights reserved.