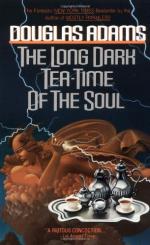 The Long Dark Tea-time of the Soul Summary & Study Guide

Douglas Adams
This Study Guide consists of approximately 30 pages of chapter summaries, quotes, character analysis, themes, and more - everything you need to sharpen your knowledge of The Long Dark Tea-time of the Soul.

The Long Dark Tea-time of the Soul Summary & Study Guide includes comprehensive information and analysis to help you understand the book. This study guide contains the following sections:

This detailed literature summary also contains Topics for Discussion and a Free Quiz on The Long Dark Tea-time of the Soul by Douglas Adams.

Kate Schechter is trying to make a trip from London to Norway, but she feels like the gods are trying to prevent her. In fact, several Norse gods are continuing an old fight, and Kate finds herself in the middle of it, along with holistic detective Dirk Gently. Dirk tries to crack the case while he and Kate travel to Valhalla and back.

Kate is desperately trying to make her flight, but the huge, shaggy man in front of her in line at the airport has no ticket. The ticket counter girl is no help at all, and Kate knows she is going to miss her flight. As Kate walks away from the ticket counter, it goes up in a ball of flame, knocking her unconscious. She wakes up in a hospital after a three-day coma and discovers the large man from the airport, along with a Coca-Cola machine. The man disappears from the hospital, and Kate visits another hospital, Woodshead, hoping to find him. She finds the man easily enough when he shows up at her house as Thor, the God of Thunder. Thor has been having some strange problems lately, which reduce his power and cause things to happen when he gets angry. He grabs Kate, throws his mighty hammer, and takes her to Asgard, the home of the gods.

That same day, Dirk Gently shows up five hours late for his appointment and finds that his client has been beheaded, though no one can figure out how or why. In the house, Dirk finds an envelope filled with a bundle of papers in strange writing, with many different names crossed off the envelope. Dirk notices that all the names are big names in the recording or advertising industry, and Dirk's client is the only name not crossed off. Dirk leaves his house because a large eagle is trapped inside and keeps attacking him. Dirk follows a crowd of homeless people into an empty train station, and it turns out that they are all Norse gods, and the station is Valhalla. Dirk finds out that Odin, the father of the gods, has sold his soul and the power of all the gods to a mortal couple, who has sold off most of the power to various record magnates. Thor finally manages to clear his head, and he rips up the contract. He changes the Coke machine back into the airport ticket counter girl and changes the eagle back into a fighter jet, which promptly blasts out of Dirk's house and into the mortal couple who bought Odin's soul. A new, evil Guilt God rises out of Dirk's old refrigerator and consumes several monsters.

More summaries and resources for teaching or studying The Long Dark Tea-time of the Soul.

The Long Dark Tea-time of the Soul from BookRags. (c)2022 BookRags, Inc. All rights reserved.