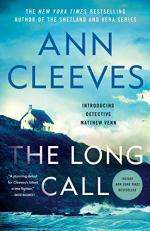 Ann Cleeves
This Study Guide consists of approximately 106 pages of chapter summaries, quotes, character analysis, themes, and more - everything you need to sharpen your knowledge of The Long Call.

This detailed literature summary also contains Quotes and a Free Quiz on The Long Call by Ann Cleeves.

The following version of this book was used to create this study guide: Cleeves, Ann. The Long Call. Pan Books, 2020. Kindle Edition.

As the narrative opens, Detective Inspector Matthew Venn is attending his father’s funeral from afar. He was not invited to the funeral because he is an outcast of the Barum Brethren, a religious group that he grew up in and his parents still belonged to. He is about to leave when he receives a call from Ross, his constable. A dog-walker found the body of a man who was stabbed to death on the beach. Ross is on his way to the crime scene with Jen, Matthew's sergeant.

It turns out that the victim is Simon Walden, a man whose guilt from killing a child in a car accident years ago caused him to go to a church in a distressed state. A woman named Caroline Preece and the curate, Edward Craven, were there at the time. Caroline, who works at the church for a charity established by her father, takes him in and offers him a room in her house.

Caroline already has one roommate. Her name is Gaby, and she is the artist in residence at the Woodyard, a community center that brings together people with learning disabilities, business people, and members of the the artistic community. Matthew’s husband, Jonathan, runs the center, Simon volunteered there, and Christopher Preece, Caroline’s father, is on the board. In addition, while working at the Woodyard, Simon befriended a woman with Down Syndrome named Lucy who goes to the Woodyard. Lucy lives with her father Maurice and has two close friends from the Woodyard, Rosa and Christine. It also turns out that the leader of the Brethren, Dennis Salter is on the Woodyard’s board. Christine’s mother, Susan, is a member of the Brethren.

As the search for Simon’s murderer continues, another mystery appears. Matthew’s mother, Dorothy, whom he has not seen for twenty years and who blames him for his father’s death, contacts him because Christine has disappeared. She and Susan are good friends. Susan’s sister, Grace, is Dennis’ wife. Christine stayed with Grace and Dennis so that Susan could attend Matthew’s father’s funeral. However, Christine never came home. Matthew feels as if there must be a connection between the Woodyard, Simon’s death, and Christine’s disappearance. However, he does not know what it is. He instructs his team to search for Christine. Then, an anonymous caller claims to have seen Christine from the bus. The tip proves to be correct and Matthew, and Jen find Christine. According to Christine, her kidnapper said that Matthew would find her. She also says that the kidnapper asked her questions that she could not answer.

At about the same time as Christine's kidnapping, the investigators discover that Simon had his own apartment. A fingerprint analysis supports the theory that Christine’s kidnapper held her there. In addition, it reveals that Gaby has been in the apartment.

When interviewed by Matthew, Gaby admits that she had a romantic relationship with Simon. She also says that she did not kill him. This revelation solves one of the mysteries about Simon’s activities before his death because a witness says that she saw him with a woman with a green jacket in a cafe in Braunton. That woman was Gaby. However, Gaby is not the killer. Neither are other suspects such as Alan Springer who loaned Simon money to start a restaurant and wants to be paid back nor the parents of the child whom Simon killed in the car accident.

After Lucy disappears, Jen realizes that Christine's disappearance was a case of mistaken identity because both Lucy and Christine have purple sweaters, attend the Woodyard, and have Down’ syndrome. The kidnapper was supposed to take Lucy, not Christine. Matthew talked to Rosa’s parents when Christine disappeared and goes back to talk to Rosa's mother. She tells him that Rosa no longer goes to the Woodyard because Edward Craven sexually assaulted her. She went to Christopher Preece and told him what happened. Dennis Salter and Coin Marston, the man who lives at the toll keeper’s cottage near the crime scene, were also there. Preece gave her money to keep quiet. The team brings Preece and Edward to the police station with the hopes of finding Lucy. They also look for the Salters and the Marstons, but they are not home. Then Matthew learns that an emergency call came in from Lucy. She called from the toll keeper’s cottage.

Matthew, Jen, and Ross go to look for her. During the search, someone knocks Matthew out and ties him up with tape. They have done the same thing to Lucy. Ross and Jen find them. After Ross unties him, Matthew makes sure that Lucy is taken care of and then goes to talk to the Salters who have returned home. Ross is also there and checks their shoes. There is sand on them. Grace confesses to killing Simon because he wanted her to help him expose Edward’s crime. She told Simon what she knew and then told Dennis. Dennis said that it was wrong for her to have talked to Simon, so she contacted Simon again pretending that she has evidence of the crime. She killed him when they met.

Matthew never thought that his boss liked him. However, at the end of the narrative, his boss congratulates the team. Matthew tells Jen and Ross that they have enough evidence to convict the Salters and Edward. He is not sure about being able to convict Preece and the Marstons. When Matthew goes home, Jonathan suggests that they visit his adoptive parents. Matthew says that maybe they can invite his mother to Sunday lunch "some day" (374).

More summaries and resources for teaching or studying The Long Call.