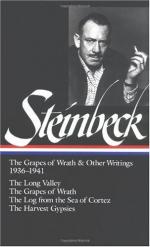 The Log from the Sea of Cortez Summary & Study Guide

John Steinbeck
This Study Guide consists of approximately 53 pages of chapter summaries, quotes, character analysis, themes, and more - everything you need to sharpen your knowledge of The Log from the Sea of Cortez.

The Log from the Sea of Cortez Summary & Study Guide Description

The Log from the Sea of Cortez Summary & Study Guide includes comprehensive information and analysis to help you understand the book. This study guide contains the following sections:

This detailed literature summary also contains Topics for Discussion and a Free Quiz on The Log from the Sea of Cortez by John Steinbeck.

The Log from the Sea of Cortez describes a marine biology expedition carried out by John Steinbeck and his close friend, Ed Ricketts, from March 11 to April 20, 1940. The expedition leaves Monterey Bay, California, travels down the coast of Baja California and into the Sea of Cortez, then returns along the same route. Marine species are collected and recorded, along with a log of whatever is encountered along the way, including observations of marine life, navigation and weather, indigenous people inhabiting the area, and the activities of the expedition party and crew. The Log also includes discussions of philosophy, biology, spirituality, and man's place among nature, which reflect long-standing interests of Steinbeck and Ricketts.

The expedition begins in Monterey Bay, where Steinbeck and Ricketts search out a captain and sailing vessel, a crew, and provisions for their journey. Their captain is Tony, a careful man who keeps a very clean and functional ship. Tex is hired on as ship's mechanic, and Tiny and Sparky as seamen, fishermen, and cooks. After participating in a celebration in Monterey Bay to mark the end of the fishing season, the ship sails south, running night and day and stopping only to take on provisions in San Diego. They mark a change in the sea and weather south of the border, and make good time to Cabo San Lucas, where they stop to have their papers examined and visit the small cannery town. After that, they sail on into the Sea of Cortez.

The expedition sails up the western shoreline, stopping nearly every day to row the skiff to a reef or shore and collect marine organisms. Often, they preserve and label these as they are sailing to the next stop. Heading north along the coast of Baja Peninsula, they collect at Cabo San Lucas, Pulmo reef, Point Lobos on Espiritu Santo Island, El Mogote, Amortajada Bay, Marcial Reef, Puerto Escondido, Coronado Island, Concepcion Bay, San Lucas Cove, San Carlos Bay, San Francisquito Bay, and Angeles Bay. Along the way, they stop in at the port towns of La Paz, where they go to Good Friday services; Puerto Escondido, where they are invited to go big-sheep hunting; and Loreto, where they visit a ruined mission and church.

At this point, the expedition heads south again, first down along the east coast of Guardian Angel Island, then across the Sea of Cortez to Tiburon Island. During the southward part of the voyage, they collect at Puerto Refugio on Guardian Angel Island, Red Bluff Point on Tiburon Island, and Puerto San Carlos. They stop in at Guaymas and spend a few days there, where they become reacquainted with the news and other communications. South of Guaymas they meet up with a Japanese fishing fleet, which is dredging the bottom for shrimp. They go aboard and observe the fishing methods, which dredge up and destroy every other species of marine life along with the shrimp, and take representative specimens. They continue collecting at Estero de la Luna and Agiabampo estuary. They then sail back across the Sea of Cortez to their last collecting stop at Espiritu Santo Island, then around the point and back home.

On the journey, the collecting party and crew slowly develop a different sense of time and begin living their lives to the rhythm of the sea. They take every opportunity to interact with, learn from, and observe the local Indians and their way of life. The cares of the modern world and the war are left behind, though Steinbeck often recalls them in philosophical thought. Much of their time is spent observing the sea and its inhabitants, and engaging in scientific and philosophical discussions suggested by what they see. The discussions range from simple speculation about a species' behavior or attributes, to wide-ranging philosophical debates about man's place in the natural world, ways of thinking and methods of scientific inquiry, and observations of their own behavior and the reasons for it. They return enriched by the experience and having gained a sense of a different way of living.

More summaries and resources for teaching or studying The Log from the Sea of Cortez.

The Log from the Sea of Cortez from BookRags. (c)2022 BookRags, Inc. All rights reserved.