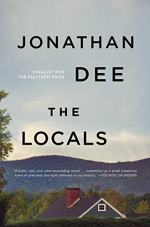 Dee, Jonathan
This Study Guide consists of approximately 43 pages of chapter summaries, quotes, character analysis, themes, and more - everything you need to sharpen your knowledge of The Locals.

The Locals Summary & Study Guide includes comprehensive information and analysis to help you understand the book. This study guide contains the following sections:

This detailed literature summary also contains Quotes and a Free Quiz on The Locals by Dee, Jonathan.

The following version of this book was used to create this study guide: Jonathan Dee. The Locals. Random House, 2017. Hardcover.

Jonathan Dee’s novel opens on the day of the September 11 terrorist attacks in New York City, where an unnamed narrator and a contractor from western Massachusetts named Mark Firth meet because they are both potential plaintiffs in a case against a financial swindler. The historic events of that day are both the temporal and thematic backdrop for the rest of the novel.

When he returned from the city to Howland, Massachusetts – a small rural town whose economy depends heavily on a regular influx of wealthy vacationers – Mark met with a hedge fund manager from New York named Philip Hadi, who has moved his family permanently to his Howland vacation home in the wake of 9/11. Philip hired Mark to install a network of surveillance cameras and other security measures in and around his house. Marty Solomon, Howland’s first town selectman – a political office tantamount to mayor – died suddenly, causing a shakeup in the town’s local government.

Mark’s brother, Gerry Firth, lost his job as a real estate agent after it was revealed that he had been having an affair with the agency’s married receptionist. In his unemployment, he founded a blog, Workingman’s Dread, for which he wrote posts about local politics under the pseudonym PC Barnum. A post he wrote criticizing Marty’s replacement as first selectman, Maeve Brennan, induced her not to run for reelection. Philip volunteered to run for the office in her stead, telling Howland’s citizens that he would not take a salary, would cut their taxes, and would fund town operations and expenses out of his own pocket.

Mark decided to abandon his general contracting work in favor of starting a house-flipping business, deliberately renting the houses to low-income tenants so the federal government would subsidize their rent. Gerry joined him as a business partner.

Elected as first selectman, Philip Hadi began proposing measures in town approaching authoritarianism, such as the installation of security cameras on Main Street, a town curfew, and a smoking ban. His governing style inspired a series of inflammatory blog posts from Gerry, arguing that “we’ve sold him the town” (231) and “what looks from the outside like it might be some kind of libertarian paradise is actually the ultimate nanny state” (232). After Philip installed the Main Street security cameras without consulting Howland’s citizens, Gerry wrote a post calling for a rally to remove the cameras, but it did not materialize.

Mark’s daughter Haley started spending her afternoons in the local public library once she reached middle school, where Candace – Mark’s sister and her aunt – was the librarian. There, she met a boy her age named Walker, who invited her to a “progressive dinner” (282), a ritual in which he and a group of his friends break into empty vacation houses and hang out there.

When Philip proposed a ban on the sale of tobacco products in Howland, without plans to bring it to a local town meeting, fellow selectman Tom Allerton instructed Gerry to write a post about Philip’s proposal and to identify himself. After Gerry wrote the post, Philip resigned as first selectman – throwing Howland into a funding crisis, as Philip had been personally financing most of the town’s operations. To cover the deficit, Tom doubled the town’s parking fines and told the local police trooper to more strictly enforce parking regulations.

Mark’s house-flipping business venture fell victim to the 2008 housing market crisis, and he and his wife Karen divorced. Karen worked at Caldwell House, a local historic mansion, and Haley – now in high school – stayed for several days inside the mansion as a vague political protest against housing inequality. When a housekeeper discovered Haley staying there, a cop nearly arrested her for trespassing, but Karen convinced him not to.

More summaries and resources for teaching or studying The Locals.

The Locals from BookRags. (c)2022 BookRags, Inc. All rights reserved.