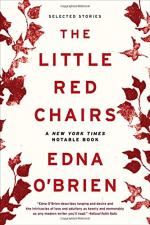 Edna O'Brien
This Study Guide consists of approximately 32 pages of chapter summaries, quotes, character analysis, themes, and more - everything you need to sharpen your knowledge of The Little Red Chairs.

This detailed literature summary also contains Quotes and a Free Quiz on The Little Red Chairs by Edna O'Brien.

The novel opens with an older bearded healer and sex therapist, Vlad, arriving in the small Irish town of Cloonoila. Eventually, Vlad sets up a clinic in the town while drawing the eye of many of the town’s women. Soon after, a woman named Fidelma, who has always wanted a child (but miscarried twice), makes an appointment with Vlad and ends up falling in love with him. After Vlad turns up at one of Fidelma’s book club’s meetings, they begin an affair which they keep secret from most of the town, including Fidelma’s husband, Jack.

Later, Fidelma finds that she is pregnant with Vlad’s child, but cannot get in touch with Vlad because he asserted that it is too dangerous for them to keep in contact. While on a bus trip to Dublin with Fidelma’s book club, Vlad is arrested and revealed to be a war criminal and former supreme leader of the Bosnian faction that initiated the Siege of Sarajevo. The town, including Fidelma, is shocked and horrified. After the arrest, three men appear in the town asking for Vlad. They learn about Fidelma and Vlad’s affair and persuades Fidelma to come with them. They bring her to a house where they perform a brutal makeshift abortion on her with a crowbar. Humiliated, Fidelma self-exiles herself to London.

In London, she makes friends with a woman named Jasmeen, whom she lives with, as well as many other immigrants. She begins working as a cleaning-woman at a bank, until she is framed by a racist co-worker and fired. While in London, she also makes friends with a peculiar little girl named Mistletoe, who seems to have a psychotic-break when she is barred from communicating with Fidelma. After being confronted by a female survivor of the Bosnian War, Fidelma is convinced to go to Vlad’s trial at The Hague and confront Vlad.

At The Hague, Fidelma watches Vlad’s trial and eventually visits him in jail. At the jail, she tells Vlad of all the bad things that have happened to her since his arrest, including the makeshift abortion. After another visit in the conjugal room, Fidelma calls him a monster and leaves. Fidelma then decides to visit Cloonoila, when Jack texts her asking her to baptize herself in the river. She does and decides to go to her old home, where Jack is waiting. He forgives her and immediately dies. At the end of the book, Fidelma moves back to London to help homeless immigrants.

More summaries and resources for teaching or studying The Little Red Chairs.