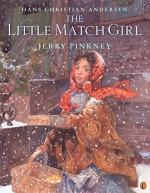 Hans Christian Andersen
This Study Guide consists of approximately 15 pages of chapter summaries, quotes, character analysis, themes, and more - everything you need to sharpen your knowledge of The Little Match Girl.

This detailed literature summary also contains Quotes and a Free Quiz on The Little Match Girl by Hans Christian Andersen.

The story begins on New Year’s Eve. The little girl was walking through the streets with nothing but a box of matches. She had lost her slippers that night, when trying to avoid being hit by a carriage. As she walked, she could smell the dinner coming from the houses nearby.

When the girl found a street corner on which to stand, she was failing to sell her matches. Because of the cold, she decided to light a match to keep her warm. She began to imagine that she was in a warm room with a beautiful dinner being prepared. However, when the match burned out, her fantasy disappeared.

When she lit another match, she saw her dead grandmother in the sky. She was so happy to see her grandmother that she used the entire box of matches to continue talking to the image of her grandmother. The story ends with the little girl passing away as she imagines herself being carried up into heaven by her grandmother.

More summaries and resources for teaching or studying The Little Match Girl.