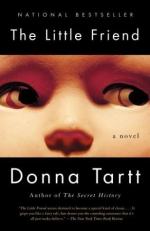 Dr. Baxter is the neurologist who comes from out of town to examine Harriet after her seizure.

Dr. Breedlove is the local family doctor who takes care of Edie, the aunts, Charlotte, Allison, and Harriet.

The Little Friend was released as an abridged audio book on compact disc by Random House Audio in 2002. It is narrated by the author.

The Little Friend was released as an unabridged audio book on cassette by Books on Tape in 2002. It is narrated by Karen White.

Ida Rhew is the African American housekeeper for Charlotte's household, who has worked for them for many years. Because of Charlotte's incapacitation, Ida serves as one of several mother figures for Allison and Harriet. Ida does all the housework, most of the cooking, keeps the house as clean as pack rat Charlotte will allow, and tries to impose a sense of propriety...