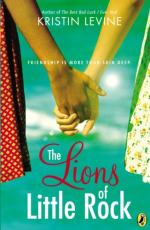 Kristin Levine
This Study Guide consists of approximately 55 pages of chapter summaries, quotes, character analysis, themes, and more - everything you need to sharpen your knowledge of The Lions of Little Rock.

The Lions of Little Rock Summary & Study Guide includes comprehensive information and analysis to help you understand the book. This study guide contains the following sections:

This detailed literature summary also contains Quotes and a Free Quiz on The Lions of Little Rock by Kristin Levine.

The Lions of Little Rock is a work of historical fiction. In this case, the real-world events are those of 1957/8 in Little Rock, Arkansas – events in which the conflict between those in favor of continued segregation of the races and those in favor of integration focused on schools and education. This novel personalizes that conflict, centering it around the home life and experiences of 12-year-old Marlee, a shy and quiet student at one of the affected schools whose life and perceptions are entirely changed by a young “colored” woman passing as white.

The novel begins with descriptions by narrator/protagonist Marlee of what her life is like: solitary, mostly silent, and relatively happy. Her closest relationships are with her compassionate older sister Judy, with her sometimes snotty school-friend Sally, and with the lions at the zoo, whose roaring and strength comfort her. When Marlee makes friends with new girl Liz, her life begins to change: Liz inspires her to talk more, to reveal her feelings more, and to face the world more directly.

The surprise revelation that Liz is “colored”, and passing as white, combined with Liz’s disappearance from school, almost cause Marlee to withdraw back into herself. However, conversations with a supportive and inspiring Sunday school teacher, with her pro-integration father, with her hitherto carefree brother, and with the family’s usually silent maid lead Marlee to think about the injustice that Liz faced, the injustices that other “colored” people face, and her own possible role in ending both sorts of injustice. Her fight begins at home as she watches her pro-integration father argue with her anti-integration mother over whether the races should “mix” or be kept separate. Her fight continues outside the home as she secretly continues to see Liz, despite the danger to both of them, and as she starts to work with pro-integration organizations.

Despite her father’s warnings to stay out of the integration / segregation battle in general, and to stay away from Liz in particular, Marlee’s commitment to the cause increases even as she’s becoming more and more comfortable living outside the self-imposed shell of silence she had been living in for so long. While frightened by threats of violence, and by repeated reminders of the difficulties Liz and other coloreds face, Marlee continues to both discover and act on what she believes to be true – that the races should interact, and that she and Liz should be allowed to continue their friendship.

Threats of violence become more real and more frightening when the older brother of one of Marlee’s friends takes control of a box of dynamite Marlee found by accident and threatens Liz and her family. In spite of Marlee’s best (and riskiest) efforts, the home of a politically active “colored” family is bombed, using the dynamite. No-one is hurt, and Marlee’s efforts to convince the police that she knows who is responsible go unheard. She does, however, manage to convince her parents to try a plan to reveal the truth, and together the family manages to trick the bomber into revealing himself.

In the aftermath of the crime being solved, Liz tells Marlee that her (Liz’s) parents don’t want them to be friends any more – but later, as they’re saying goodbye, Liz gives Marlee her new phone number. As the novel comes to an end, a new stage in the friendship between the two girls begins.

More summaries and resources for teaching or studying The Lions of Little Rock.

The Lions of Little Rock from BookRags. (c)2022 BookRags, Inc. All rights reserved.