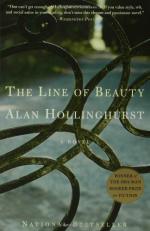 The Line of Beauty Summary & Study Guide includes comprehensive information and analysis to help you understand the book. This study guide contains the following sections:

This detailed literature summary also contains Topics for Discussion and a Free Quiz on The Line of Beauty by Alan Hollinghurst.

The early 1980s were a time of great change socially and politically. People were carefree and enjoyed excessive lifestyles. Casual sex and recreational drug use were prevalent. The wealthy class hosted extravagant parties with no expenses spared.

The political climate was also changing, with the election of Margaret Thatcher and her new regime. The early 1980s were a time of great indulgence and the mid-1980s were the peak of this lifestyle. As the 1980s came to a close, the discovery of AIDS closed the door on sexual freedom and self-indulgence. Nick Guest, The Feddens' and politics as a whole experience this rise and fall, and their lives parallel this curve during the 1980s.

Nick Guest, aged twenty, is a recent graduate of Oxford. After graduating, Nick moves into Kensington Park Gardens, the home of Oxford classmate Toby Feddens. Toby lives with his father Gerald, his mother Rachel and his manic-depressive sister Catherine in Notting Hill, a wealthy area of London. The year is 1983, a politically charged yet socially innocent time in London. It is a time of opulence and indulgence, before AIDS. The Conservative Tories have just elected Margaret Thatcher into office. Gerald Feddens is a newly elected conservative Member of Parliament for Barwick, where Nick was raised. It is during this time that Nick Guest is coming of age.

Nick is a homosexual who has only been open about his sexuality since his final year at Oxford. Nick has never had a sexual relationship, except in his mind. Nick fantasizes about Toby but would never act upon his longings. Nick has his first real sexual encounter with Leo, whom he meets through a personal ad. Catherine encourages this blind date, but Nick must postpone the initial meeting because Catherine has a mental "episode" and Nick must stay with her. Catherine is very unstable and unpredictable, and Nick knows that Gerald and Rachel depend on him to look after her. Nick never tells Gerald and Rachel about this particular instance of Catherine cutting herself, and this act of loyalty towards Catherine will come back to haunt him.

Nick is no longer with Leo as the story leaps to 1986, and he is now a sexually experienced, confident young man. Nick finally accepts his homosexuality, but he realizes that a large part of society still does not. Nick indulges in cocaine and casual sex. He is very impressed by the lavish lifestyle that he leads by being a member of the Feddens' extended family. Nick attends grand parties among wealthy business people and politicians. He is intelligent enough to handle himself, but he never really belongs. It is at Toby's twenty-first birthday celebration that Nick runs into an old Oxford classmate named Antoine "Wani" Ouradi.

Wani is a close friend of Toby's, whom Nick has fantasized about since college. Although Wani is engaged to Martine, he begins an affair with Nick. Nick is in love with Wani, but Wani insists that the relationship be kept a secret from everyone. Nick respects his wishes until Catherine finds incriminating evidence while on holiday in France, at which time Nick confides in her.

Gerald Feddens is named in a financial misdealing with Maurice Tipper, and the news hits the media. This is during the new election, and the Tories are expecting another landslide, although they narrowly win. Catherine is a loose cannon, and she simultaneously reveals Nick's affair with Wani and her own father's affair with his secretary. Gerald and Rachel blame Nick for not controlling Catherine, and Toby is devastated that his friend has been keeping his relationship with Wani a secret from him. Nick has become the scapegoat.

In the end of the novel, Nick is moving out of the Feddens house. He has taken a test for AIDS, a disease that has already claimed Leo and Wani. Nick is already aware of his fate.