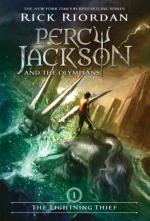 This detailed literature summary also contains Quotes and a Free Quiz on The Lightning Thief by Rick Riordan.

The Lightning Thief, the first in the Percy Jackson series, by Rick Riordan, begins with Percy Jackson taking a school trip to the Metropolitan Museum of Art. Not everything is what it seems, as Percy’s math teacher turns into a Fury and attacks him. Percy is able to defeat the monster through the use of a bronze sword. In the aftermath of the attack though Percy is surprised to find that nobody has ever heard of the math teacher before, making him wonder if it had been real or just a hallucination. Not even his best friend, Grover, knows what he is talking about.

As the end of the year draws near Grover insists on escorting Percy home from school. He believes that Percy is in some kind of danger, but can’t say what. Here, readers are introduced to Percy’s parents. His mother, Sally, is a kind-hearted woman who longs to be a writer. Sadly, she has never been able to achieve those dreams and works at a candy shop just to make ends meet. She is married to Gabe Ugliano, Percy’s stepfather, who hates him. Gabe treats Percy like a resident at the house instead of a stepson, believing that Percy should provide him with money in exchange for room and board. Percy is not only frustrated with Gabe’s behavior, but also his mother for sending him away to boarding school every year.

Percy and his mother attend a weekend retreat at the beach, where they are met with a horrible storm. In the evening Grover appears and reveals himself to actually be a mystical creature, a Satyr. He tells Percy that he’s been watching over him until Percy was old enough to attend Camp Half Blood, a mystical summer camp for training demigods. Grover reiterates his earlier warnings about Percy being in danger, this time adding that monstrous forces are after his friend.

On the way to the camp, they are attacked by another mystical creature, the Minotaur. The Minotaur knocks out Grover and squeezes Percy’s mother, causing her to disappear in a shower of golden sparks. Percy is heartbroken, assuming that he’s just seen the death of his mother. He manages to save his best friend though, pulling him into the safety of Camp Half Blood. At the camp Percy is introduced to his Latin teacher, who reveals himself to actually be Chiron, a centaur and the trainer of legendary heroes. At the camp, Percy learns that the Greek gods are very much real and still present in our world today. He learns more about their present day mythology, such as the fact that Olympus hovers invisible over the Empire State Building. He also learns that in the last sixty years the “big three” (Zeus, Hades, and Poseidon) have refused to have mortal children, believing that any of their offspring would be too powerful. The other gods can still have children though, who make up the student body at the camp.

Percy meets Annabeth, who is a daughter of Athena. He also meets Luke, the son of Hermes. Not all of his introductions go well though, and Percy ends up making enemies with Clarisse, the daughter of Ares. At first, Percy doesn’t know who his father is. During one of the training games it is revealed that he’s in fact the descendent of Poseidon, the first in three generations. Shortly after this, Percy learns that there is trouble in Olympus. Zeus’s master bolt has been stolen, and Zeus believes that Poseidon is the one responsible. The master bolt is so important because it is the weapon that all other lightning bolts are modeled after.

Zeus believes that Poseidon used Percy to steal the bolt. He gives Poseidon ten days for the bolt to be returned. Poseidon doesn’t want to risk war with Zeus, and he knows that he can’t find the bolt on his own. He goes to Percy for help to find out where the bolt truly is and who took it. Chiron believes that Hades is the one who stole it in order to pit Poseidon and Zeus against each other. Percy has to travel to the Underworld, located in Los Angeles, to confront Hades. Before leaving, he consults with the Oracle. The Oracle warns him that he will fail to save what matters the most, and also tells him that he will be betrayed before the journey is over.

Percy sets out with the aid of Annabeth and Grover. During their travels, the group learns to trust each other and each undergoes their own personal journey. Grover overcomes his fear of monsters, which lets him convince the Council of Cloven Elders to allow him to search for the missing god, Pan. Annabeth learns to trust Percy, despite his father and mother being longtime rivals. Percy has to come to terms with anger towards his real father, who had ignored him for so long. On their journey they also meet more supernatural creatures, including the Medusa, a Chimera, Procrustes the Stretcher, and even the god Ares. Percy is given a mysterious backpack by Ares in exchange for a favor. Percy also meets a Nereid, who gives him three magical gems from Poseidon, which can send anyone to the sea no matter where they are.

The group finally arrives in the Underworld only to discover that Hades wasn’t the true culprit. Instead it was the defeated Titan, Kronos, who has the ability to manipulate the dreams of both men and gods. Kronos was manipulating an unknown human to steal artifacts from Zeus and Hades in the hopes of starting a war between the powerful deities. Kronos’s thief was captured by Ares though, who had given the stolen items to Percy in the backpack. The group is assaulted by an army of the dead, as Hades believes them to be the ones responsible. Percy can return them to the seas, but he wants to leave with his mother as well. Since he only has three gems he’s forced to save himself and his friends, promising his mother that he will one day come back for her.

Percy and his friends escape to the surface and battle Ares. They manage to defeat him and return the stolen objects back to their proper homes. This gives Percy a chance to meet his father in Olympus, who says how proud he is of Percy despite initially being distant from his son. Poseidon tells Percy that his mother has been returned as a peace offering from Hades. He also warns Percy that he will have a difficult choice to make. Percy is then returned to his home where he finds the head of Medusa which he had mailed to himself earlier. Percy wants to use it to turn his stepfather to stone so his mother can be free, but she stops him and tells Percy that she has to be the one who leaves him.

Percy returns to the camp where he is betrayed by his friend Luke. Luke was the one who Kronos had initially used to steal the bolt in the first place. Luke poisons Percy and tells him that Kronos will rise and destroy all of the other gods. Percy is spared thanks to Chiron’s intervention. Chiron tells him that Percy’s journey is far from over, and he must become a hero to fight the rise of the Titans and keep the other gods safe.