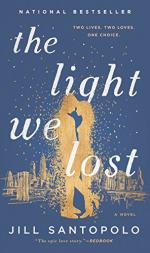 Jill Santopolo
This Study Guide consists of approximately 100 pages of chapter summaries, quotes, character analysis, themes, and more - everything you need to sharpen your knowledge of The Light We Lost.

The Light We Lost Summary & Study Guide includes comprehensive information and analysis to help you understand the book. This study guide contains the following sections:

This detailed literature summary also contains Quotes and a Free Quiz on The Light We Lost by Jill Santopolo.

The following version of this book was used to create the guide: Santopolo, Jill. The Light We Lost. G. P. Putnam's Sons, 2017.

Two college students, Lucy and Gabe first meet and come together the day of the terrorist attack on the Twin Towers. Drawn together by circumstance and the desire to live life to the fullest at every moment, they kiss in front of the back drop of smoke, rubble, and destruction. With a passionate relationship from the start, the pair seem destined to find their way back to each other, even when external factors seem to affect this such as Gabe getting back together with his ex-girlfriend, Stephanie. After they graduate, and find careers of their own, what seems like fate brings them back together on Lucy’s birthday, and from then on, they are inseparable.

The relationship they share is exciting, passionate, and very intimate, and it seems as though there is no one else either one could ever be with. With every passing day, they learn more about each other and explore the city around them. Both of Gabe’s parents are artists and he shares their talent, being an incredibly evocative photographer. Lucy learns that Gabe’s father was volatile and violent, and left him and his mother when he was nine. Gabe vows to never end up like him, and never to hurt Lucy the way his father hurt his mother. Gabe shares with her his desire to make his life more meaningful and to try and make the world a better place through his photography. Lucy is a producer of children’s TV shows and hopes she can make a difference by using them to teach children important lessons about the world.

When Gabe decides he has to leave America in order to fulfil his dream of bringing attention to significant things happening in the rest of the world, he leaves Lucy heartbroken and alone, feeling incomplete. She does not understand how he could leave her as if their relationship meant nothing to him. It takes a long time for Lucy to begin to heal, but eventually she meets Darren. He is smart, funny, handsome, and a few years older than her, and seems like he could make her happy again. Darren loves Lucy deeply and does everything in his power to make her happy, even if she cannot fully understand his methods. Lucy and Darren get married and have two children together, and generally have a very good life together.

Gabe keeps popping back into her life periodically and briefly, stirring up old memories and Lucy’s feelings for him making the situation more complicated. Lucy knows she still loves him and always will but she has a life and children now that she cannot leave. When she suspects Darren of cheating on her, Lucy runs back to Gabe and sleeps with him, reigniting their flame. Gabe asks Lucy to come to Jerusalem with him but she cannot leave her children. They decide to see where things go with Darren and let things happen as they will. When it turns out that Darren was never unfaithful, Lucy is overcome with guilt and shame, before finding out she is pregnant and does not know who the father is.

She gets word that Gabe has been injured in Gaza and is in hospital, and Lucy must make the decision of whether to keep him on life support or end his life. She carries out a paternity test and finds out that Gabe is the father of her unborn child. She does not want to let him die without telling him he has a son. She finds Gabe’s will in which he leaves her ownership of his creative works and copyright, and after realizing that nothing she can do will bring him back, Lucy makes the decision to take him off of life support, holding him in her arms as he dies.

She writes a letter to her and Gabe’s unborn son telling him about Gabe, how much she loves him, and that if he ever finds that kind of love, he should never let it go.

More summaries and resources for teaching or studying The Light We Lost.

The Light We Lost from BookRags. (c)2022 BookRags, Inc. All rights reserved.