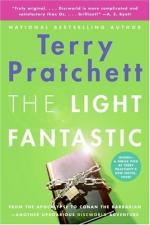 Terry Pratchett
This Study Guide consists of approximately 34 pages of chapter summaries, quotes, character analysis, themes, and more - everything you need to sharpen your knowledge of The Light Fantastic.

This detailed literature summary also contains Topics for Discussion and a Free Quiz on The Light Fantastic by Terry Pratchett.

The Light Fantastic is the second book in Terry Pratchett's Disc World fantasy series. It follows the adventures of the failed wizard, Rincewind, and his tourist friend, Twoflower. Rincewind has the eighth spell from the famous Octavo book stuck in his head. Unfortunately, the wizards need the spell to save the world from destruction.

In the Unseen University in Ankh-Morpork, wizards gather around a cellar door watching the Octavo coming alive. The book is trying to break free from its padlocks and chains. Finally, it manages to release a blue light that shoots up to the top of the building. The Wizards follow the light outside and watch it disappear over the edge of the world. At the same time, Twoflower and Rincewind are trying to leave the world, but the force of the Octavo send them tumbling back to the Disc.

In the Unseen University, the head wizard, Galder, calls up Death and asks him what is happening. Death explains that Rincewind has the eighth spell of the Octavo book in his head, and if the spells are not together by Hogswatch, the spells will destroy the disc. Galder sends wizards into the Skund Forest to find Rincewind. Meanwhile, the wizard Trymon goes to the library and takes out the book "The Pyramid of Tshut," which will help him find the spell. He knows whoever finds the spell has the potential to be very powerful.

The Wizards find Rincewind in a barley sugar cottage and try to grab him. Fortunately, Rincewind and Twoflower find a broomstick and fly off to safety. While they are in the air, they see a red star. It frightens Rincewind so much that he directs the broomstick back towards the Disc. However, instead of the ground, they land on a flying rock. The person on the rock says they are heading for a stone circle. Back at the Unseen University, Trymon enlists the help of an astrologer to find the whereabouts of Rincewind. The astrologer says he is among Druids. At the stone circle, the Druids conduct a ceremony, and Rincewind hears a voice in his head saying he must safeguard the eighth spell.

The Druids have tied a woman to a stone in order to sacrifice her. Just as Twoflower is protesting about the barbarity of it, a man puts his hand over Rincewind's mouth and tells him to rescue the girl or Rincewind will die. Rincewind and Twoflower go to help the girl, but the Druids attack them; a sickle strikes Twoflower across the head. However, they all manage to escape, with Rinceflower carrying Twoflower and the rescued girl carrying the old man. Back at the Unseen University, Trymon has taken over as head Wizard. He calls a meeting and tells the wizards he has hired a hero to track down Rincewind.

Rincewind takes a green potion, which takes him to Death's house. In Death's house, he finds Twoflower and escapes. Before he goes back into the world, he has a meeting with the Octavo. The other spells tell him the Wizards are trying to get the eighth spell back. When he gets back to his other companions, Bethan and Cohen, have become very close.

Rincewind, Twoflower, Cohen and Bethan ride to a pine forest, where they decide to camp for the night. While the others prepare something to eat, Rincewind goes in search of onions. Instead of onions, he meets trolls. They tell him they have heard of him in troll legend and they must help him. The trolls and Rincewind go back to the opening where the others were, but everyone has disappeared. The Trolls suggest they enlist the help of Old Granddad up in the cliffs. When they get to the cliffs, they see that the female hero, Herrena, and her men have captured the other three and lit a fire inside Old Granddad's mouth, thinking it is a cave. Old Granddad wakes up, and Rincewind is able to save his friends.

Rincewind tells Twoflower that Cohen is barmy, and they must split up from him. Unfortunately, Herrena captures Twoflower and Rinceflower and starts to take them back to the wizards. They come to a river where a ferryman offers to take them across. Herrena is suspicious because he is not the normal ferryman. Realizing the game is up, the ferryman reveals himself as Cohen and saves Rincewind and Twoflower. Cohen tells them he is getting married to Bethan, and they need to find a priest. At a village, Cohen goes off to look for a wedding ring, while Rincewind, Twoflower and Bethan wait for him. Moments later, villagers with red stars painted on their foreheads, ambush them and try to kill Rincewind. Rincewind manages to use the eighth spell and they escape into a magical shop.

Cohen finds a jewelery shop run by a Dwarf called Lackjaw. Lackjaw is making a wedding ring when villagers ambush his shop. Cohen beats them up and he and Lackjaw make their escape. Meanwhile in the magical shop, Rincewind ask the shopkeeper if the shopkeeper can take them back to Ankh-Morpork. The shopkeeper says yes. When they arrive in Ankh-Morpork, they join a huge crowd of people making their way towards the Unseen University.

Rincewind, Bethan and Twoflower find a way into the University and head towards the cellar and the Octavo book. When they get there, they find Trymon has already taken the book and is heading towards the Art Tower. When the three characters get to the Art Tower, Trymon has already said the seven spells and is on his way to becoming the most powerful wizard in the world. Rincewind climbs the Art Tower, but Trymon attacks him with a blue thunderbolt. Rincewind tries to call on his spell for help, but it is too frightened to come out.

Rincewind attacks Trymon. Initially he is winning, but Trymon turns into a monster with tentacles and talons. Just in time, Twoflower appears with a sword and kills the monster. Rincewind falls over the edge of the Art Tower but manages to grab hold of an overhanging stone. Cohen appears with some wizards and they help him back up. Rincewind then reads the spells to save the world, but nothing happens. As the town folk move in to kill Rincewind, Bethan realizes he has mispronounced one of the words. Bethan, Rincewind and Twoflower take turns to say the mispronounced word, but Twoflower is the one who says it correctly. With the world saved, Twoflower leaves for home and Rincewind decides to retrain as a wizard.

More summaries and resources for teaching or studying The Light Fantastic.