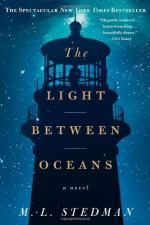 The Light Between Oceans: A Novel Summary & Study Guide

M.L. Stedman
This Study Guide consists of approximately 51 pages of chapter summaries, quotes, character analysis, themes, and more - everything you need to sharpen your knowledge of The Light Between Oceans.

The Light Between Oceans: A Novel Summary & Study Guide Description

The Light Between Oceans: A Novel Summary & Study Guide includes comprehensive information and analysis to help you understand the book. This study guide contains the following sections:

This detailed literature summary also contains Topics for Discussion on The Light Between Oceans: A Novel by M.L. Stedman.

"The Light Between Oceans" tells the tragic story of lighthouse keeper Tom Sherbourne and his wife Isabel who, after discovering a baby in a shipwrecked boat, must face the terrible consequences of their decision to raise the child as their own.

At the opening of the novel, Tom has just left service in WWI and has signed on a lighthouse keeper with the Australian harbormaster. He is sent as a temporary keeper to Janus Rock, a tiny island off Point Partageuse, after the previous keeper went insane. On his way to the mainland the first time, Tom rides in the bottom of a large ship, surrounded by fellow ex-soldiers whom he feels camaraderie toward. During the trip, Tom witnesses one of the ex-soldiers attacking a rich, female passenger, and he stops the soldier from harming the woman. When he lands on Point Partageuse, Tom meets a beautiful young woman named Isabel Graysmark, and the two fall in love. A year after Tom moves to Janus Rock, he and Isabel are married, and he takes her to live with him in the lighthouse.

Tom and Isabel adore their isolated life together on the island, but their honeymoon comes crashing to a halt when Isabel miscarries three consecutive pregnancies. Depressed that she cannot fulfill her role as a woman and a wife, Isabel retreats into a dark depression that permeates the island. One afternoon, Tom is startled to discover a shipwrecked boat on the beach. Aboard, are a dead man and a squalling infant. Tom quickly takes the baby girl inside and passes her to Isabel, who takes over as the infant's mother as if she had given birth to her herself. Although Tom wants to report the shipwrecked boat, Isabel convinces him that God has sent them the child as a gift after snatching so many of their pregnancies away from them. Because Isabel has only just miscarried her last pregnancy two weeks ago, she still has milk and is able to breastfeed the child. Against his better judgment, Tom agrees, buries the dead man's body, and takes up the charade that Isabel has given birth to a healthy baby girl, whom they name Lucy.

All is well on Janus Rock as the little family enjoys their life together. Lucy grows into a precocious, loving child, and back on the mainland, Isabel's family are excited to see their beautiful granddaughter during the couple's rare shore leaves. During the family's first leave from Janus Rock two years after Lucy's arrival, however, Tom discovers that a local woman, Hannah Roennfeldt, still mourns the mysterious loss of her husband Frank and their two-month old daughter, Grace, after Frank was forced to flee the town during an attack two years ago. When he hears the story, Tom has no doubt that Frank Roennfeldt was the dead man in the shipwrecked boat, and that Lucy is Hannah's long-lost daughter, Grace. He wants to tell Hannah Roennfeldt the truth. Isabel, on the other hand, is outraged by Tom's idea, arguing that far too much time has passed to simply apologize. Returning Lucy to her birthmother will surely cause more harm than good, and once again, she convinces Tom to keep quiet.

Two more years pass and Lucy is now four-years-old. Once again, the Sherbourne family returns to the mainland, and this time, they come face-to-face with the tormented Hannah Roennfeldt. Unable to keep silent any longer, Tom leaves Hannah an anonymous note saying that her daughter is alive. This note sparks a massive search effort culminating with a deckhand, Bluey, admitting that he saw Grace Roennfeldt's one-of-a-kind silver rattle on Janus Rock. It doesn't take long for police to figure out what Lucy Sherbourne is actually Grace Roennfeldt, and they quickly remove her from the island. Isabel is beside herself with grief and anger as Lucy is snatched away from her, and most of that anger is aimed toward Tom, whose guilty conscience lead to Lucy's return to the mainland. Rather than hurt Isabel any further, Tom lies to the police saying that stealing Lucy had been entirely his idea, and that Isabel had nothing to do with it. Tom is placed in jail awaiting trial while Isabel is set free. Even though Isabel knows that Tom will likely be hung for his admitted crimes, her anger is so great that she does nothing to help save him, and even suggests to the police that Frank Roennfeldt was alive when he landed on the island.

Meanwhile, Hannah Roennfeldt is beside herself with happiness when news is released that her daughter is alive. When she is reunited with little Grace, however, she is shocked by how angry and frightened the child is. She had hoped there would be an invisible bond between herself and the child, and is unable to cope when Grace cries all day, everyday, begging to be returned to Isabel. Even though she knows her daughter belongs with her, Hannah wonders if it would be in everyone's best interest if she returned Grace to Isabel. In a moment of weakness, Hannah tells Isabel that if Tom is telling the truth, that stealing Grace had been his idea alone, and if Isabel will testify to that in court (ensuring that Tom is either imprisoned for life or executed), she will give Grace back to her. Isabel is floored by the offer, but ultimately decides that she cannot betray Tom so brutally, no matter how angry she is. She tells the police the truth, and Tom is sent to prison for six months and she is given a suspended sentence to recuperate in the local mental hospital.

The novel ends twenty years after Grace's return to Hannah. Tom and Isabel have moved 400 miles away to the tiny seaside town, Hopetoun, and Lucy-Grace, as she has come to be called, has grown up in Perth with her mother, Hannah. In the novel's final chapter, Isabel dies after a long battle with cancer, and a few days after the funeral, Lucy-Grace arrives to express her condolences to Tom, whom she once called "Papa." Although Lucy-Grace has few memories of Tom and Isabel, she knows that they loved her. She has forgiven the couple for their crimes, and seeks to make peace with Tom. The novel ends quietly, with Lucy-Grace hoping to come back to visit Tom again someday, and Tom staring sadly at the horizon, watching the ocean give way to the night.

More summaries and resources for teaching or studying The Light Between Oceans: A Novel.

The Light Between Oceans: A Novel from BookRags. (c)2022 BookRags, Inc. All rights reserved.