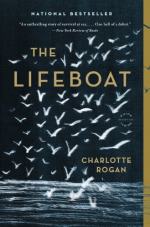 Charlotte Rogan
This Study Guide consists of approximately 41 pages of chapter summaries, quotes, character analysis, themes, and more - everything you need to sharpen your knowledge of The Lifeboat.

The Lifeboat Summary & Study Guide includes comprehensive information and analysis to help you understand the book. This study guide contains the following sections:

This detailed literature summary also contains Quotes and a Free Quiz on The Lifeboat by Charlotte Rogan.

Grace and 38 other people climb aboard Lifeboat 14 as it is launched from the sinking ship. At its helm is Mr. Hardie, a veteran seaman and the only crewmember among those on 14.

With 39 people on board Lifeboat 14 (alternately called "14"), Grace and the others are surprised to see how low in the water the boat is riding. It is only later learned that the size of the lifeboats were diminished in order to save money, but the plaques denoting them fit for forty people were never changed. As a result, survivors in 14 must constantly bail out water from the bottom. They later discover a hole which they have difficulty keeping plugged.

Initially, Grace and the others on board are happy to have Hardie at the helm. He is resourceful, fiery, and experienced, all things which the survivors on 14 appreciate. He keeps order, assigns tasks, rations food and water, and keeps the hopes of the others alive. When the initial shock of the sinking wears off, the survivors settle into a strained but orderly routine which helps them to cope. Grace constantly worries about the life of her husband Henry who was also on board the ship. They have been married for just a few short weeks. She hopes he has survived the sinking.

Cracks in the order quickly appear. Mrs. Grant, a large and imposing first-class woman, along with some other passengers, begin to question some of Hardie’s decisions. For example, while pulling away from the wreck of the Empress, Hardie fights to keep other survivors from trying to climb onto 14. He says this is to stop the boat from being swamped. Hardie also opposes linking up with other lifeboats, including the one headed up by Second Officer Brian Blake. The other passengers wonder why Hardie would go out of his way to avoid Blake and the boats.

As days pass, the passengers begin to grow on one another’s nerves. They are living in close proximity, have no privacy, and as a result, rumors and gossip spread quickly. Food and water begins to run short, fueling tempers and passions. Passengers also begin recalling bits of memories from the voyage that have a bearing on the present. For example, Grace worries whether or not people are aware the Empress has sunk, because the Marconi machine was broken prior to the sinking. Other passengers remember hearing heated arguments between the ship’s captain and Hardie, and they claim that the captain was prepared to fire Hardie.

Questions are raised by Mrs. Grant, Hannah, and others, believing that either bad blood or a conspiracy between Blake and Hardie existed. They come to believe that Blake and Hardie wanted to steal valuable gold from the ship –something which Hardie does not deny or confirm. Many of the passengers on 14 come to believe that Hardie avoided Blake’s boat because Blake’s boat was laden with gold.

As food and water supplies dwindle, people grow ill, weak, and many begin to die. Some willingly throw themselves overboard to save the others, including a deacon. Hardie’s own resolve weakens. As Mrs. Grant grows in power and stature among the occupants of 14, Hardie’s own status vanishes. Grace herself begins to wonder if survival is possible anymore, or if Hardie truly is fit to lead now.

Grant finally challenges Hardie’s fitness to command 14. She calls for a vote on removing Hardie from command and throwing him over the side. With the exception of Grace, who abstains, and Anya Robeson, who votes no, all the women vote to remove the delirious Hardie. The handful of men on board vote to keep him. Hannah immediately attacks Hardie. Grant orders Grace to assist Hannah. Grace unthinkingly follows orders, though she is not exactly sure what she is doing. Only when Grant orders Grace and Hannah to throw Hardie overboard do Grace and Hannah do so.

A week later, the survivors are picked up by an Icelandic fishing ship, and transferred to a mail ship bound for Boston. Back on land, Grace, Grant, and Hannah are arrested and charged with murder. Three lawyers are hired for Grace by her new mother-in-law, including Mr. Reichmann, who is able to prove that Grace acted without deliberation or premeditation, and under fear and duress in a terrible situation. While Grace is freed, Hannah and Grant are found guilty and imprisoned.

After the trial, Grace meets Henry’s mother for the first time. It both begins and ends a chapter in her life. She later marries Mr. Reichmann, and sees a psychiatrist for a while. Grace refuses to send money to help Grant and Hannah in their appeal.

NOTE: Due to the structure of this novel, this guide specifically refers to the 2012 Reagan Arthur/Back Bay Books paperback edition.

More summaries and resources for teaching or studying The Lifeboat.

The Lifeboat from BookRags. (c)2022 BookRags, Inc. All rights reserved.