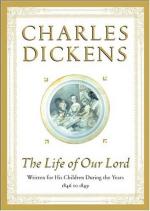 The Life of Our Lord Summary & Study Guide

Charles Dickens
This Study Guide consists of approximately 23 pages of chapter summaries, quotes, character analysis, themes, and more - everything you need to sharpen your knowledge of The Life of Our Lord.

The Life of Our Lord Summary & Study Guide Description

The Life of Our Lord Summary & Study Guide includes comprehensive information and analysis to help you understand the book. This study guide contains the following sections:

This detailed literature summary also contains Topics for Discussion and a Free Quiz on The Life of Our Lord by Charles Dickens.

Charles Dickens (1812-1870) is widely known as one of the great novelists of the nineteenth century. He wrote numerous books that are historical classics, including Oliver Twist, David Copperfield, Great Expectations and A Tale of Two Cities. Dickens became popular due to his ability to speak to each member of his audience that he wrote to directly; he has also retained his status for this reason. But in the Life of Our Lord, one of Dickens' least well-known books, Dickens wrote specifically for his children. The book was not intended for publication; it went into circulation sixty-four years after he died, in 1934. The book was written in 1846 while Dickens was in his prime. He wrote The Life of Our Lord while staying at Lausanne, Switzerland.

The Life of Our Lord is the story of the four Gospels of the New Testament. Dickens believed strongly in the New Testament and thought it was the greatest of all books; the Life of Our Lord is a condensation of the books of Matthew, Mark, Luke and John for his children. It hews close to the structure and prose of the Gospels, often using the same phraseology. What will interest mature readers are those parts of the Gospels that Dickens chose to emphasize and those he downplayed. Dickens focused on Jesus' moral message, his focus on mutual understanding, and love for the brother and care for the sick, poor and hated.

Dickens believed that Jesus' moral teaching should be followed in day-to-day life. However, the miraculous side of Jesus Christ is downplayed. For Charles Dickens, Jesus was primarily a great moral teacher to be imitated as a man. The book is effectively condensed, though the astute reader will notice a few errors, such as the claim that the Jews celebrated the Sabbath on Sunday and Dickens' confusion of Herodias and her daughter Salome.

The book is quite short, containing eleven short chapters. The first chapter covers the circumstances surrounding Christ's birth, the second his childhood and first miracle, and the third focuses on the selection of the apostles, the Lord's Prayer and the healing of the sick. Chapter four focuses on the Pharisees and John the Baptist, and chapter five discusses Mary Magdalene, the loaves and fishes incident and when Jesus walked on water. Chapter six contains the transfiguration, the laborers in the vineyard and the accused woman, and chapter seven relates the parables of the Good Samaritan and the prodigal son along with the story of the widow's mites.

Chapter eight explains Lazarus's resurrection, Jesus' trip into Jerusalem, the removal of the money-changers and the wickedness of Judas. Chapter nine includes the Last Supper, the garden of Gethsemane and Jesus' arrest; chapter ten has Peter's denial of Jesus, Judas's death, Pontius Pilate's judgment and Jesus' thorny crown. Chapter eleven brings the story to an end with the Christ's crucifixion, resurrection and ascension and the Acts of the Apostles and Saul's conversion. The book ends with some of Dickens's family prayers and a brief afterward.

More summaries and resources for teaching or studying The Life of Our Lord.

The Life of Our Lord from BookRags. (c)2022 BookRags, Inc. All rights reserved.