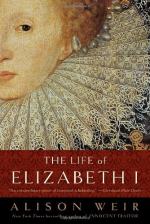 The Life of Elizabeth I Summary & Study Guide

The Life of Elizabeth I Summary & Study Guide Description

The Life of Elizabeth I Summary & Study Guide includes comprehensive information and analysis to help you understand the book. This study guide contains the following sections:

This detailed literature summary also contains Topics for Discussion and a Free Quiz on The Life of Elizabeth I by Alison Weir (historian).

THE LIFE OF ELIZABETH I focuses on Elizabeth I's personal life more than her political life, looking through the lens of Elizabeth as a person and not just a Queen. The reader gains insight into her personality and the details that accompanied her everyday life. The book follows Elizabeth throughout her entire reign, emphasizing her intelligence, wit, and tenacity as a female monarch.

The beginnings of Elizabeth's reign were fraught with tensions because of the unsuccessful reign of her half-sister Mary Tudor. The people did not want another female monarch, but Elizabeth was not a religious fanatic like Mary and quickly brought the public around to support her. She changed the official religion to Protestantism and made the Book of Common Prayer the official book of worship. She entertained ideas of marrying many different suitors, including Robert Dudley, later Earl of Leicester. She never married because she did not want to give up her power as Queen and did not want to put England in the hands of a foreigner. Mary, Queen of Scots was Elizabeth's cousin, and she lived in England after her unsuccessful reign as Queen of Scotland. Mary was Catholic, and throughout Elizabeth's reign there were plots to put Mary on the throne of England instead of Elizabeth and restore Catholicism to England. This plan was supported by King Philip II of France, who had been wed to Mary Tudor before her death. Elizabeth was a very visible monarch, and made a point to put herself on display for her people. She went on tours of her kingdom every summer, staying with nobility and members of her court. She was a great horsewoman and a patron of the arts, enjoying music, painting, and theatre. As a single woman, she was always under threat of conspiracy or attack and was sometimes forced to execute traitors for her own safety, including the Duke of Norfolk and Mary, Queen of Scots. She had many favorites, including the Earl of Leicester, with whom she may have been in love. She famously defeated the Spanish Armada with a combination of bad weather and good military strategy, and made the speech at Tilbury to her many troops. She also defeated the Irish rebels and brought economic prosperity to England. She kept control until the very end of her reign when she began to tire of being a ruler. Most of those she loved from early in her life had died, and England was on the cusp of a new era. Elizabeth was still hesitant to name a successor but finally indicated James V of Scotland, who became James I of England. Elizabeth I was buried in Westminster Abbey, and thus ended England's Golden Age.

The Life of Elizabeth I from BookRags. (c)2022 BookRags, Inc. All rights reserved.