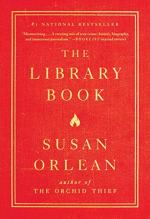 This detailed literature summary also contains Topics for Discussion on The Library Book by Susan Orlean.

The following version of this book was used to create this study guide: Orlean, Susan. The Library Book. Simon and Schuster, New York, NY. 2018 – First Hardcover Edition. The narrative is a blend of objective investigation, subjective commentary, and memoir, each chapter beginning with a list of book titles that are relevant to that chapter’s content.

Throughout the book, the author entwines a number of narrative and thematic threads. The first, recounted in a journalistic, research-based style, is the story of the 1986 fire that virtually destroyed the Los Angeles Central Library. She outlines how the fire progressed, the science associated with both the fire itself and the investigation into its causes, and how that investigation ended up focusing on Harry Peak, an aspiring actor who was seen in and around the library by several different people at different times on the day of the fire, and who confessed to friends that he had set it. Eventually, the author writes, the investigation resulted in no charges, with no answers on its origins, and with no clear indication of Harry Peak’s guilt or innocence.

The second narrative thread is a portrayal of the library’s contemporary functions, purposes, and departments. There are references to its current chief librarian, to the workings of several departments, and to the participation of various individuals in those departments. Key elements throughout the development of this thread include consideration of how technology has affected the library’s role and function in both positive and negative ways, and how contemporary libraries all over the world (not just in Los Angeles) are struggling with the issue of what to do with, and about, the large numbers of homeless people who make use of the library and its services.

The third narrative thread that winds throughout the book is a consideration of the history of the Central Library, both its function in the city of Los Angeles and the building in which it was housed. The author chronicles the earliest days of book lending in Los Angeles, offers brief professional and personal biographies of several persons who became its chief librarian, and follows the library’s history through the time of the fire and beyond. At this point, the first two narrative threads become one, as both the history of the fire and the library’s general history become the same thing.

The fourth narrative thread that winds through the book relates to the author’s personal experiences. On several occasions, the narrative slips into either first person narration or a more memoir-like detailing of fact, circumstance, and experience; in short, the perspective becomes much more subjective than much of the rest of the novel, which tends to have a more objective, academic tonal quality. This tonal quality is neither consistent nor tightly adhered to: there are parts of the more reportage-oriented sections of the book in which the author, somewhat suddenly, injects a first person comment. This subjectivity also winds through the second narrative line, with considerations of the library’s contemporary functions and struggles being recounted through a lens, and with a style, that is often quite personal.

Overall, there is a clear sense of a narrative considering the past, present, and future not only of one particular library, but of libraries in general. The book begins and ends with the author’s personal, subjective considerations of how all these temporal, or chronological, considerations are linked by a commonality of purpose – to offer library patrons opportunities to know more about the world, and about themselves.