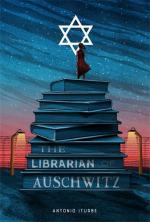 Antonio Iturbe
This Study Guide consists of approximately 46 pages of chapter summaries, quotes, character analysis, themes, and more - everything you need to sharpen your knowledge of The Librarian of Auschwitz.

The Librarian of Auschwitz Summary & Study Guide includes comprehensive information and analysis to help you understand the book. This study guide contains the following sections:

This detailed literature summary also contains Topics for Discussion on The Librarian of Auschwitz by Antonio Iturbe.

The following version of this book was used to create this guide: Iturbe, Antonio. The Librarian of Auschwitz. Henry Holt and Company, 2017.

This Holocaust survival story, written by Spanish novelist Antonio Itubre, is based on 14-year-old girl Dita Kraus, who risks her life to protect a selection of eight books smuggled in by prisoners of Auschwitz. She stores the books in hidden pockets in her smock, and circulates them to the hundreds of children imprisoned in Block 31.

Within the walls, there exists a family camp known as BIIb: a place where children play and sing, but school is prohibited. Despite the Nazis orders, Fredy Hirsch establishes a small, yet influential school to house the children while their parents slave in the camp. The books, which must be hidden from the Nazi guards at all costs, selects Dita, a brave and independent young woman from Prague to take over as new Librarian of Auschwitz in January of 1944. Itubre uses the books from the library, in combination with flashbacks from Dita's memory as a method to compose his third-person narrative and draw comparisons between the characters and their experiences, addressing themes of death, politics and innocence.

While imprisoned in Auschwitz, dodging death, disease and Nazi guards, Dita and her parents Liesl and Hans represent the fight of thousands of Jews battling to outlast the war. Dita, however, is fighting her own battle to preserve the books that bring joy to the children in the camp. The books are one of the few things that allow the children to escape from the walls in which they are surrounded, even if just for a moment.

As the war progresses, Dita continues to diligently serve the teachers and children of Block 31. Although Dita is quite fond of her leader, Freddy, she overhears a conversation with him and an unnamed man. Fredy admits that that he has a secret that he is holding from the rest of the prisoners. Concerned for her life, as she is in charge of items the Nazis deemed as contraband, her mind travels to the worst scenario: she thinks Fredy might be a Nazi spy. Dita begins to snoop around looking for answers and people she can trust. However, as is later revealed, the secret was that Fredy is a homosexual.

In the months that follow, Dita's struggle continues. Her father passes away in the camp due to pneumonia, and her and her mother are left to fight the battle on their own. Her mother is growing weaker with age, and Dita feels she has to assume more responsibility.

Dita is enlightened to the fact that the camp is simply a front to produce Nazi propaganda, and she struggles to feel the value in her life. The feeling of hopelessness is magnified in March of 1944. The Nazis announce that the inmates who arrived in September will be transferred to another division. However, most of the older inmates realize that transfer is just code for murder. Attempting to inspire an uprising, camp registrar Rudi Rosenberg turns to Fredy. Fredy, begins to weigh the fact that innocent children are going to die either way, asks for an hour to make a decision. He is later found dead in his hut from a suspected overdose, and 3,800 inmates are incinerated.

Life in BIIb continues until news comes that the Nazis are going to liquidate the family camp and separate the fit to work from the rest. Dita's mother Liesl, who by this time has grown old and is very weak, narrowly escapes death, as she is able to sneak into the group that is fit to work along with her daughter. They eventually end up in Bergen-Belsen concentration camp.

In the new camp, Dita and her mother struggle to stay alive. The conditions are much worse than Auschwitz, and the food rations diminish each day. Thankfully, Dita has been reunited with her close friend Margit from Block 31, but that only momentarily distracts her from the suffering. Just as Dita's sanity begins to waiver, and she feels this might be the end, the Allied forces liberate the camp. Unfortunately, it is too late for Dita's mother, who dies just after the English arrive.

On her own now, Dita heads to find Margit, who left her directions on how to find her. When Dita arrives at Margit's door, they embrace with the feeling of true freedom.

More summaries and resources for teaching or studying The Librarian of Auschwitz.

The Librarian of Auschwitz from BookRags. (c)2022 BookRags, Inc. All rights reserved.